I’ve been chatting to Germans. Not all Germans, obviously, but people who regard themselves as representative of the vast German middle class.  I was seriously taken aback by the way they regard Brexit. As you might expect, they take an almost diametrically opposite view to the view we are used to hearing here. A mirror image, if you like.
I think they accept what their media says, unquestioningly. They must trust their media more than we trust ours.

Their primary response to Brexit is….. a feeling of deep sadness. They insist they don’t want to punish us and they’re just sorrowful.

They say their ideological (pro EU) position trumps all concerns and worries over trade issues. In other words, even if they do ‘need us more than we need them’ trade-wise, they’ll happily suck it up for the sake of the Union. Unity within the EU reigns supreme, specially with Macron onside. If necessary we are all prepared to cut off our nose to spite our face. 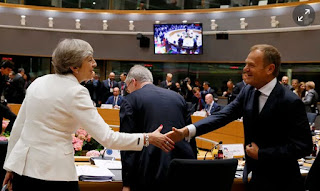 As for the status of EU nationals living and working in the UK and UK nationals living and working in the EU, the German attitude might surprise anyone who had only been listening to the British media.
Far from a question of EU intransigence, they believe Theresa May snubbed them with her mealy-mouthed proposal, having completely ignored their paper, which contained a very generous offer.
This EU paper, which predated ours, was hardly mentioned in our domestic media, although the Guardian had:

“The EU’s offer was handed to May on 12 June after consultation with groups representing Britons in about a dozen countries. But it got little attention and was not publicised by Westminster, which was reeling from the surprise election result and then the Grenfell Tower disaster.

And the Guardian also set out the German position on this matter quite clearly here:

“Theresa May’s proposal to protect the rights of EU citizens after Brexit is so poor, it will badly damage the rights of Britons living in Europe, campaign groups have told the European commission.

In an official response to the EU Brexit negotiating team, British in Europe and the3million have said that if May’s proposal is adopted it would represent a “severe reduction of the current rights” enjoyed by Britons in Europe.

Last week they expressed fears that Britons would be the “sacrifical lambs” in the Conservatives’ mission to reduce immigration.”

However, there are only 900,000 UK citizens and expats residing in the EU, while there are over 3million EU citizens in Britain, so one might think that either side rigidly insisting on ‘reciprocity’ shouldn’t be an insurmountable  issue.  If the EU wants to occupy the moral high ground, what’s to stop them from unilaterally granting Britons the rights they are asking for? The main thing Brits in the EU now want is certainty about their future. (Just as the Europeans residing here do.)

If any agreement necessitates using ‘humans as bargaining chips’ then the morality police in the Labour Party can’t really criticise the Conservative government for intransigence, nor should they be able to get away with badgering Theresa May to make a unilateral and unconditional offer of ‘everything’.

One topic about which I didn’t hear much discussion was... migrants. They played down “Cologne”, almost dismissing it as irrelevant, and insisted that Angela Merkel is clamping down hard, with a policy of zero tolerance. Migrants are compelled to go to language classes and obey German law or be deported.

They were as fond of those familiar ‘out of context’ soundbites as we are, though the thrust of the soundbites was a bit of a one-way street. In particular, Boris has incensed them with his ‘cake and eat it’  and his ‘go whistle’. These are things a politician is supposed to ‘know’ not to say.

Having said that, there is this controversial piece in the Spectator by Markus Krall "The EU will be the only loser if it plays games over Britain's departure"

‘This is not about punishing Great Britain,’ declared Sigmar Gabriel, Germany’s interim foreign secretary, on his recent visit to London. I fell about laughing, because this is precisely what’s going on. It is as obvious to us Germans as it is to the Brits: the EU cannot tolerate the thought of a successful United Kingdom outside the Brussels sphere of influence because, if that were allowed to happen, others might dare to start thinking about leaving the club too.”

Is Mr Krall representative of anyone other than himself?  I don’t know. I only know how annoying it can be when some ‘self-hating’  individual is quoted to “prove” something that is patently false.

And in the Times (£) this article about MEP Hans-Olaf Henkel:

“Hans-Olaf Henkel, deputy head of the European parliament’s industry, research and energy committee, warned other MEPs “not to listen” to Michel Barnier, who he said wanted to impose a bad Brexit deal on Britain.”

And this piece by Mr. Henkel about Euratom, the organisation through which Britain and Europe have co-operated on nuclear power and nuclear science, and this interview with Hans-Olaf Henkel on the Today Programme.

“A German politician has accused the European Union’s chief negotiator of trying to punish Britain by making a deliberate “mess” of key elements of Brexit. Hans-Olaf Henkel is deputy chair of the European Parliament’s industry and research committee and Katya Adler is the BBC’s Europe editor.”

I’m quite happy to accept that these controversial views do not represent the mainstream German view, but what I found particularly interesting was that when Mr. Henkel had finished the BBC turned to Katya Adler for her interpretation of the interview, as they do.  She gave an accurate summary of the German attitude to Brexit (as understood and described above.) Then she did something quite unusual. She put Mr. Henkel into context, more or less advising us not to take his views too seriously.

(Oh for a BBC employee to do that when we’re being subjected to the views of someone who has been introduced as an expert on the Middle East, but who is in fact an antisemitic, anti-Israel activist.)

She reminded us about who Hans Olaf Henkel  is.

Katya Adler:  (?)
“That is right. Um We have to have a look at who Hans Olaf Henkel is. I mean I think when it comes to Euratom it’s hard to find anybody who doesn’t agree some solution must be found  to keep the UK at least a close associate member of Euratom for the reasons Mr Henkel outlined, but if we take a wider look at Brexit and the negotiators, I mean Mr Henkel is German, most Germans are devastated about Brexit. We’ve heard from the German finance minister who said the door is always open if the UK changes its mind - the Germans meant, I mean if you look at the trade that we do with the EU, a big chunk of it is with Germany and on a wider level the UK and Germany were traditionally very aligned in EU circles and Germans don’t want the British to go; off the record, many said ‘You’re gonna leave us with the French - please don’t go” but as far as criticising Mr. Barnier for example, Hans-Olaf Henkel is formerly of the Eurosceptic AfD party, not typical, I mean his often negative view of things European."