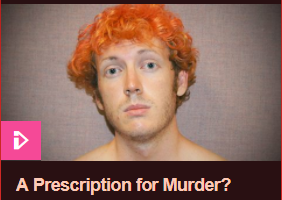 As always when you watch such programmes, non-experts will be left floundering. Many might just accept it. Others (like me) wonder, 'Can we trust it?' and then start Googling around.

There was a large, hostile social media reaction from depression sufferers and concerted criticism from psychiatric and medical organisations but also some praise for it, especially from critics of 'Big Pharma' and others worried about the medicalisation of treatment for mental health problems.

Here are a selection of responses. I've tried to find a balance of pieces - some defending and some condemning Panorama - but (so far) I've only managed to find pieces condemning it.

Panorama’s prescription (The Lancet)
Last night’s Panorama on antidepressants was propaganda, not journalism (iNews)
Depression and why shaming those who take pills risk lives (Daily Mail)
As Someone Who Has Taken SSRI Antidepressants BBC Panorama Angered And Distressed Me (Huffington Post)
I Take Antidepressants – BBC's Panorama Linking Them To Murder Was Irresponsible & Disturbing (Refinery 29)

'Vested interest' though they'll doubtless be called, The Lancet's take seems to me the most measured - though no less damning than the others. Though they say it wasn't as bad as they feared, they argue that: that the case study of the killer didn't prove what Panorama implied it proved; that the programme essentially confused 'association' with 'causation'; that the "small minority" Panorama talks of (taking Panorama's own statistics) is actually vanishingly small; that antibiotics are actually more fatal, statistically-speaking; that the issue of a link between antidepressants and violent thoughts is far more nuanced than Panorama suggested; and that antidepressants protect from suicide (and that people could be scared off taking them because of programmes like this).

It's not as if Panorama wasn't right to tackle the issue. It's the way they handled it that's the issue. Couldn't they have explored it in a more balanced and less sensationalist fashion?
Posted by Craig at 12:55