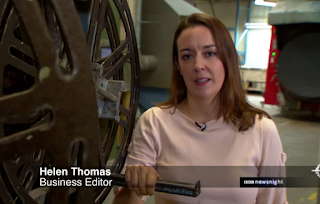 Now, Newsnight is unquestionably correct that there is a real issue here but its reporting last night struck me (and many others) as pure sensationalism.

We had a one-sided, scaremongering report from Helen Thomas, complete with images of geese flying serenely (us now) and flightless ostriches (us potentially after Brexit), and this was followed by a woefully brief interview between Conservative MEP Jacqueline Foster and economist Peter Morris, where Ms. Foster found herself being repeatedly interrupted by Kirsty Wark (£150-199K) before being ostentatiously - and rudely - 'faded out' by Newsnight. (That said, Ms. Foster didn't seem impressed by the quality of Helen Thomas's reporting or Kirsty Wark's grasp of the facts.)

Here's how the item was framed:

Kirsty Wark: Also tonight, we're used to being on the wing to Europe in our millions, but when we leave the EU, will we be forced to go into reverse, or even be grounded?

Kirsty Wark: Since we joined the EU, we have enjoyed pretty much unfettered air travel to European Union destinations - give or take a strike or storm or two. In fact, the Office of National Statistics reported that, last year, there was a record total of 14.7 million visits to Spain alone by UK residents - the vast majority of these were for holidays. But when we exit the EU, if we leave the European industry and safety bodies - as seems to be the plan - we may be in for a very bumpy ride. Here's our business editor Helen Thomas.

Helen Thomas: For decades, we've been taking flight to an ever-increasing number of destinations. But as we migrate towards Brexit, there are warnings of turbulence ahead. If we're not careful, could we find ourselves, well, flightless?