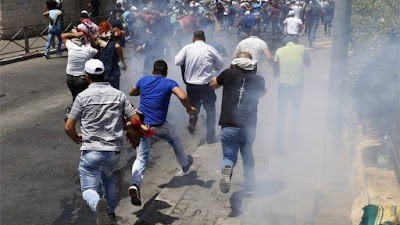 Obviously there are time constraints on a magazine programme like Sunday, (Radio 4 9am) but if asking Yolande Knell to sum up, in a few minutes, the background to the ‘latest crisis in the Old City of Jerusalem” was a big ask, expecting her to “remind us why this place is so precious to two faiths” was to call for a small miracle.

Well, one could say she rose to the challenge. I’ll leave the religious element out of this critique as I’m no expert on religion to put it mildly. However, the arrangement whereby Jews are ‘allowed to visit but not to pray” has led to some truly bizarre situations.

The Muslim ladies whose job it is to wave copies of the Koran at religious Jews who enter the site, whilst shrieking and ululating and generally harassing them is one example of something that seems plain weird. It’s been going on for years.

And watching for signs of Jews’ lips moving in case they’re praying. Is that not a bit bonkers?
It’s called the status quo because that’s the standing arrangement between the Israeli powers that be and the Jordanian Waqf. It’s not under threat by the way, even though, as a permanent arrangement, it seems a bit mad and thoroughly unfair.

Apart from the omissions, (facts without which the whole story is impossible to grasp) emphasising certain parts of the tale while swiftly glossing over others reveals how Yolande, on behalf of the BBC, views what she refers to as the “Israel Palestinian” conflict.

Yolande went native some time ago, as we’ve long observed. Her pronunciation is a give-away. “Ramull-lah” she says, with the prolonged, throaty “ll”s. “Isslaam” with the hissing “s” and the long flat “a”. The rolled “r”s in the Harrram al-Sharrrif.  She’s really down with the kids. On their wave length.

That’s not a bad thing in itself, I will grant you. But a tad one-sided.

But it’s the way certain things were slipped into Knell’s summary, and certain things were left out that clinched the case. For example, the fact that Christians joined the Palestinians in protest. Did they really? If true, why include that in a time-constrained summary? To emote that ‘everyone hates the Jews?’ The perilous circumstances of Christians in the Middle East might have some bearing on their behaviour. You can’t just ignore that.

“Um, fifty years ago Israel captured the Old City, all of the east of Jerusalem, and annexed it in a move that wasn’t recognised internationally.”

Facts floating in the air without context. The listener might wonder, why on earth did nasty Israel go and capture the Old City? Just another example of Israel’s innate aggression and expansionism?  Puh- lease!

At least mention that under Jordan’s (illegal) annexation, synagogues were desecrated and Jews were barred. “The old City was rendered void of Jews.” Perhaps also add that in 1967 Israel faced its intended annihilation by Egypt Jordan and Syria, in a war that was instigated by Arabs. In ‘capturing’ the old city Israel freed it from Jordanian reign and liberated Jerusalem.

“For 19 years, Jews and Christians residing in Israel (and even Israeli Muslims) were barred from their holy places, despite Jordan’s pledge to allow free access. Jews, for example, were unable to pray at the Western Wall; Christian Arabs living in Israel were denied access to churches and other religious sites in the Old City and nearby Bethlehem, also under Jordanian control.16 During Jordan’s reign over eastern Jerusalem, its restrictive laws on Christian institutions led to a dramatic decline in the holy city’s Christian population by more than half – from 25,000 to 11,000,17 a pattern that characterized Christian Arabs in other Arab countries throughout the Middle East where religious freedom is not honored.

It was only after the Six-Day War that the Jewish Quarter was rebuilt and free access to holy places was reestablished. It is worth noting that after Jordan annexed the West Bank in the 1950s, it too failed to make Jerusalem – a city that Arabs now claim as ‘the third most holy site of Islam’ – its capital.”

Last but not least, the cold-hearted description of the murder of the Solomon family.

“In the occupied West Bank you had a young Palestinian man who broke into an Israeli settlement and stabbed to death three members of the same family in their home.”

Settlers, don't you know. Living in an Israeli settlement.  In the BBC’s opinion, did the ‘young Palestinian man’ Omar al-Abed have “lawful excuse” for entering a family’s home while they were laying their table, and stabbing three of them to death?

Listen to the broadcast here  Transcript over the page.


Ed Stourton:
“Has the latest crisis in the Old City of Jerusalem been resolved? Earlier this month the Israeli authorities installed a new security system in the area known as the Temple Mount, or to Muslims  Haram al Sharif, after two Israeli police officers were killed; but the new system was removed this week following violent protests in which three Palestinians died. Yolande Knell is on the line from Jerusalem.
Yolande, firstly, remind us why this place is so precious to two faiths”

Yolande Knell
“Well I suppose this is really one of the most recognisable views of the Old City of Jerusalem, the plaza known to Muslims as Haram al-Sharif or the noble sanctuary. You have inside it the golden dome shrine, the Dome of the Rock, which is believed to mark to spot where the profit Mohammed began his night journey to heaven, and right by it the al-Aqsa Mosque, the silver dome there - that’s really the third holiest site in Islam.
But Jews call this same site Temple Mount, and they believe it to be the location of their two biblical temples; it constitutes the holiest place in Judaism, ah, the second temple, Herod’s temple, was destroyed of course by the Romans in 70 AD. The Western Wall is said to be all that remains of that and that’s now the holiest place where Jews can pray, and the real significance nowadays, unfortunately, tends to be as a flashpoint for violence in the Israel Palestinian conflict. This is why we’re constantly covering this area in the news.
Um, fifty years ago Israel captured the Old City, all of the east of Jerusalem, and annexed it in a move that wasn’t recognised internationally.
Israel sees east Jerusalem as part of its united capital - the Palestinians want east Jerusalem as the capital of their future state, and they’re always very worried about any perceived attempts by Israel to extend control over the site - for example one of the triggers for the second Palestinian intifada or uprising back in 200 was when Ariel Sharon visited temple Mount and that’s when rioting began.

E.S.
So an example there of how trouble in this area can spread throughout the occupied territories. Any sign of that happening in the past few days?

Y. K.
It’s definitely what’s happened over the past two weeks. It was back on the 14th July that there were two Israeli policemen that were shot dead by three armed men that were using guns that had been smuggled into the al-Aqsa Mosque compound and Israel responded then by closing off the mosque for Friday prayers and it was just the second time it had done that in fifty years, and Palestinians in east Jerusalem prayed that day outside in the street.
But then when the mosque was allowed to reopen, Israel had put in place these new metal detectors and then put in security cameras, saying that this was a safety issue - the Palestinians and the Islamic Waqf, the Jordanian body that administers the site, refused to enter they said this was a change to the status quo agreement governing the site. Israel denied that, but then in the days that followed Palestinians continued, quite spectacularly, to pray in the streets.
On some occasions Palestinian Christians joined the Muslims - there were big clashes with Israeli security forces and at least four Palestinians were killed that way. Then one week into the crisis, in the occupied West Bank you had a young Palestinian man who broke into an Israeli settlement and stabbed to death three members of the same family in their home. And the violence even spread to Jordan where an Israeli Embassy guard shot dead two people apparently after one of them tried to attack him in his residence.
So it was only this week that Israel finally removed all these new security measures. Muslim worshippers began returning to the site, um it does now appear to be much calmer.

E.S.
And is that it? Or do you think it’s got the potential to flare up again?

Y.K.
It still remained extremely tense on Friday because of age restrictions that were imposed by Israeli police, they said they were very worried about disturbances. I was there when people on Thursday were happily returning to the site and then such large crowds tried to break through one of the doors that was kept shut and stun grenades were thrown at the crowds, there was a lot of panic and chaos then, but there’s been a lot of international expressions of concern here, a lot of diplomacy going on behind the scenes and I think really it’s just a very big reminder of how Jerusalem remains a very thorny issue, a core issue at the heart of the Israel Palestinian conflict.
What’s worrying I think is that this has deepened the mistrust on both sides just at the very time when you’ve got new efforts to try and restart the peace process between Israel and the Palestinians.