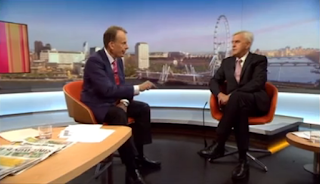 Talking of The Andrew Marr Show, there was a fascinating exchange this morning between Andrew Marr and John McDonnell that ought to be transcribed for posterity. So here it is:

AM: One other thing I must ask you about. Do you regret saying that the people who died in Grenfell Tower were killed by 'political murder'?
JMcD: No, I don't regret that. I was extremely angry at what went on, and I'm a west London MP. This site is not far from me. Political decisions were made which resulted in the deaths of these people. That's a scandal.
AM: But 'murder' means a specific thing. 'Murder' means a volition to actually kill another human being, intentional killing.
JMcD: No, there's a long history in this country of the concept of 'social murder', where decisions are made with no regard to the consequences of that, and as a result of that, people have suffered. That's what's happened here, and I'm angry with that.
AM: You do regard it as murder?
JMcD: I believe social murder has occurred in this instance and I believe that people should be held accountable for that.
AM: And so who are the murderers?
JMcD: I think there's been a consequence of political decisions over years that have not addressed the housing crisis that we've had, that have cut back on local government so proper inspections have not (been) made, cut back 11,000 firefighters jobs been cut as well, even the investment in aerial ladders and things like that in our country.
AM: So the politicians who sanctioned the cuts are murderers?
JMcD:  I believe the politicians have to be held to account. I remain angry at how many people have lost their lives as a result of political decisions that have been made over years. I was one...I set up...
AM: (interrupting) This is, to be absolutely clear, these decisions happened under Labour and Tory governments, over the years, over the years...
JMcD: I set up the Fire Brigades Union parliamentary group way back in 2004. I raised the issue of sprinklers. All through that, this last seven years in particular, I have been going along with ministers on behalf of the FBU saying "Stop cutting firefighter jobs. Stop undermining national standards", and no one was listening at that point in time.
AM: Very, very strong word to use, but 'murder' is still how you regard politicians who took those decisions?
JMcD: I do not resile from what I said, and I remain angry at the loss of life that has taken place not far away from my constituency.