For those who can't see beyond the paywall at the Times, Andrew Marr has written an article there on the present political situation: 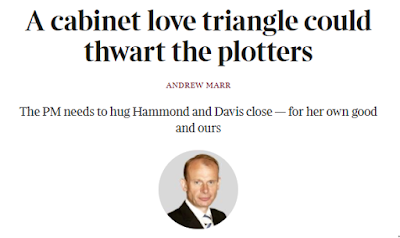 Employing my antique school English summarising skills, I'd sum up his message like this:

The plot against Mrs May is a serious one. That said, if she was overthrown during the Brexit negotiations it would make us look "terminally ridiculous". So what Mrs May needs to do is to make friends again with Philip Hammond and to get David Davis to stop Boris from challenging her. Otherwise, Tory madness will bring everything crashing down around her (and us). And Jeremy Corbyn should seriously think about trying to unify not only his own party but the whole opposition (including Tory Remainers) in order to change the government's direction on things like membership of the EU customs union. Yes, that would mean Labour being "less radical than its own manifesto" but by "nudging" Britain in a "new direction" on Brexit it could show that it's not "extreme or dangerous" but "practical and popular", wielding influence and, thus, raising its credibility as a prospective government. Oh, and we need to increase our productivity.

I don't think it's that hard to guess where Andrew's coming from here.
Posted by Craig at 19:37