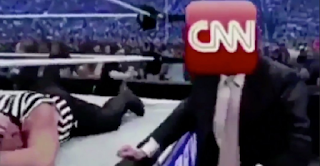 There's a story blowing around today that seems to be exciting a lot of interest - at least on social media and in the mainstream media.

The bare bones of the story are that the anonymous Reddit user who posted that photoshopped WWE GIF of Donald Trump beating up CNN was subsequently tracked down by CNN and found to have posted racist, Islamophobic and antisemitic comments online. He apologised and deleted his Reddit account.

After posting his apology, "HanA**holeSolo" called CNN's KFile and confirmed his identity. In the interview, "HanA**holeSolo" sounded nervous about his identity being revealed and asked to not be named out of fear for his personal safety and for the public embarrassment it would bring to him and his family.

CNN is not publishing "HanA**holeSolo's" name because he is a private citizen who has issued an extensive statement of apology, showed his remorse by saying he has taken down all his offending posts, and because he said he is not going to repeat this ugly behavior on social media again. In addition, he said his statement could serve as an example to others not to do the same.

CNN reserves the right to publish his identity should any of that change.

Some have found that rather 1984-ish, with many accusing CNN of actively blackmailing a private citizen simply because he mocked them. (A corrected Winston Smith awaiting the bullet in his brain).

The hashtag 'CNNBlackmail' has 'gone viral'.

Brendan O'Neill at the left-libertarian site Spiked argues this point with particular force in a piece headlined "CNN has officially lost the plot".

Criticise CNN and it will attack you and punish you; misbehave again and it will punish you even more, he says, adding it's "hard to disagree" that it is blackmail.

It is every citizens’ right to rip the piss out of massive media organisations and their reporters, and they shouldn’t be made to ‘fear for their safety’ for exercising that right.

Now there is no question in my mind that Mr Solo posted some things that many people will object to strongly. (The Guardian went into all the gory details a few days back.) I also object to some of them strongly, having now read them.

But the questions for CNN surely remain:

Isn't that just being vindictive?

And isn't it rather ugly behaviour from that media organisation when they then (appears to) threaten to reveal the 'offender's' identity if he fails to behave correctly in future?

How isn't that blackmail?

That said, CNN haven't revealed his name yet. So they haven't been as vindictive as they could have been.

I'm trying to be fair here.

Naturally, giving how 'CNNBlackmail' went 'viral, BBC Trending was soon on the case.

Given how partisan so much of what's been written about this story has been it wasn't very hard to work out which side the BBC was on here.

The whole article, by Chris Bell, is well worth reading, if only an English Language case study in detecting bias.

The article itself is an absolute treasure house of trick of the trade when it comes to biased reporting (conscious or otherwise).

[Before that, however, came this gem:

The creator of the gif has an offensive word in his username that we are unable to state, so we have removed the word and will refer to him as "HanSolo".

On first reading that I thought the worst and - that the 'offensive word' between 'Hans' and 'Solo' would be so beyond the pale {eg. the 'n' word} that not even asterisks could ever save it from eternal perdition, but - though I'm no swearer myself - even I think I can just about manage the word 'asshole' without fainting or having my monocle drop into my champagne glass in sheer shock and horror!]

According to the BBC's Chris Bell, it's only the alt-right pursuing this blackmail charge against CNN.

It's "media influencers" pursuing the blackmail "line" against CNN. It's "right-wing US internet personalities and Julian Assange". It's "right-wing online activists and conspiracy theorists". And the main "right-wing author and commentator" cited is described as "alt-right" and having been "instrumental in spreading false claims about Hillary Clinton during the 2016 US election".

In other words, it's just right-wing nutters (and Julian Assange) who are backing the blackmail 'meme' against CNN here - even though, from the case of Spiked for starters, we know that's not the full story.

The CNN journalist behind the story, however, is given a full right of reply in this BBC piece. Chris Bell presents his take straight, without either criticism or editorialising. He's the hero here.

The thought criminal H**sAssholeS**o's abject confession is quoted at length.

I don't think there can be any doubt whatsoever about which side the BBC reporter is taking here. It's not Brendan O'Neill's for sure, but it is CNN's.

Chris Bell may be right, he may be wrong, or he may be partly right and partly wrong. But impartial he most certainly isn't.
Posted by Craig at 22:33