We need to talk about Kevin

Will be on @BBCNews on @BBCOne shortly talking about the Kevin Myers story.
— Amol Rajan (@amolrajanBBC) July 31, 2017


Isn’t this a funny old business?
Here we have Kevin Myers, a writer/journalist/ provocateur who has got himself into hot water for writing an antisemitic column in the Irish Sunday Times.  Not only has he got himself into trouble, but he’s managed to drag a whole bunch of people down with him.
As Vanessa Feltz said just now on the BBC News channel, many others will have seen the piece and passed it before it went to press. You can’t just write something and publish it (like we bloggers can) Your official, legitimate press article has to be commissioned, approved, and cleared by armies of editors, sub editors and so on before it goes to press.

(Thank goodness for blogs, although at times I must admit a sub editor would have come in handy.)

It’s quite ironic that as soon as an antisemite like Myers gets caught out and admonished, or in Myers’s case, sacked, the antisemites swarm round with fresh, blatantly antisemitic remarks and innuendos, which commonly include the accusation that the all powerful Jewish Lobby is trying to “silence them”  or shut down debate. If they can’t see that the very presence of their own antisemitic bile staring back at them on the page belies that circular, self defeating argument, they must be deeply stupid.

As part of the all powerful Jewish lobby, the last thing I want to do is shut down debate, but I don’t think ‘holocaust denial’ really constitutes debate. Antisemites obviously find the Holocaust pretty annoying, because mentioning it loses them the moral high ground, which can have a chilling effect on the pure unadulterated hatred they feel the need to express. 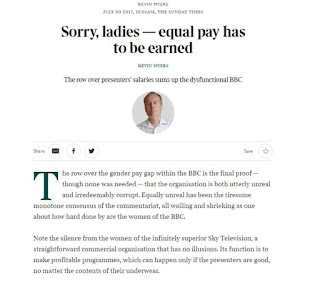 “Sorry ladies, equal pay has to be earned”
“men usually work harder, get sick less frequently and seldom get pregnant”.
“I note that two of the best-paid women presenters in the BBC — Claudia Winkleman and Vanessa Feltz, with whose, no doubt, sterling work I am tragically unacquainted — are Jewish. Good for them. Jews are not generally noted for their insistence on selling their talent for the lowest possible price, which is the most useful measure there is of inveterate, lost-with-all-hands stupidity.
I wonder, who are their agents? If they’re the same ones that negotiated the pay for the women on the lower scales, then maybe the latter have found their true value in the marketplace. “

How antisemitic is that? Well, it’s using that ‘trope’ (recurrent theme) that the Jews are greedy. Not all that much worse than anything you might come across in the Guardian, but nasty all the same.  Brian Sewell got away with it!

The pompous phrase Myers uses about the good ladies: “with whose, no doubt, sterling work I am tragically unacquainted” leaves a glaringly open goal begging, begging to be flung right back. Who has ever heard of Kevin Myers? Tragically, up till yesterday, not I.

Anyway, the “fun” response is here, by another 'Kevin', and former colleague.

“Myers is not a journalist, never has been. He is an overpaid star columnist on the Irish edition of The Sunday Times who writes a weekly rant that is based solely on his own warped view of the world. There is no striving for balance or fact-based evidence with Myers: just an outpouring of bile and sermonising that is intended to offend, shock or outrage readers. He makes the likes of Katie Hopkins and Kelvin Mackenzie seem like reasonable human beings.”

Another piece, which I will preemptively label  the ‘bleating’ response, is here:

“There’s nothing remotely controversial about this statement to me, because as a Jew, I’m on the receiving end of this type of remark all the time.”

Needless to say, on cue, a goodly measure of ’this type of remark’ appears below the line. 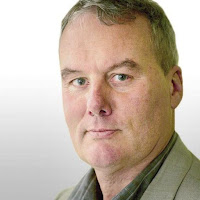 The piece that puts all the rest of it into some sort of context is here. It’s by Kevin Myers himself, in the Sunday Times, I assume the Irish edition, written after the Manchester suicide bombing.

It’s called “Nazis hid their crimes: islamists exult in them."

So Kevin isn’t a left-wing Islamist apologist and antisemite of the variety commonly found amongst the Corbynista wing of the Labour Party. No, he’s an old fashioned right-winger who hates Nazis, Islamists, and possibly Jews, in equal measure.
Now, we can hardly start saying things about ‘my enemy’s enemy’, can we, although he gets plenty of praise below the line for his bravery in writing a piece about Islam which flies in the face of political correctness. Although the piece is aimed at the Irish audience, there is much within it that it’s hard to disagree with. One might well ask, how can it be that he writes a piece criticising Islam in no uncertain terms and no-one bats an eyelid, yet the minute he turns his talents against the Jews, everyone is up in arms.?

My answer to that is going to sound pretty obvious (channeling Mandy Rice-Davies.) There are substantive reasons to criticise and fear Islam. It’s subversive, incompatible with ‘Western values’ and threatening. Specific aspects of Islam concern and alarm us, forming a legitimate basis for debate. Suicide bombings, stabbings, vehicle-rammings, no-go zones, cousin marriage, female genital mutilation, grooming gangs, antisemitism and, to quote Kevin Myers, “ The hijab — the full facial veil — is a public refutation of the norms of our society”  to name but a few of the  actual differences between ‘them and us.’
To put it crudely, Islam is behind violence, cruelty, sexual repression and terrorism. Innocent people die.

On the other hand, antisemites emote, insinuate and snipe, and some seriously think the Jews mess with your mind, control the media, are the cause of all wars and, if everyone hates them, there must be a very good reason why. But they haven’t got a substantive reason for their hatred. Of course there is always Israel, the country the British media has vilified and traduced with great success, effectively concealing from the public the Islamic antisemitism that is at the heart of the conflict, thus arming antisemites with the false equivalences they need to prop up their racism.

I’m getting tired of writing about BBC bias all the time. When we started doing it, we were the few. Now we’re the many.
This time the BBC is not the main offender. They’ve reported it, albeit with brevity, and dare I say, lack of detail. But they have featured it on their News channel.

I don't know what to make of it really; but please, you make of it what you will.

Update:
I hadn’t read this post by Sarah AB when I wrote the above. There are some interesting comments, and new (to me) info, including references to Myers’s support for Israel, which is something I’d never have imagined to be the case.  Not everyone thinks he’s antisemitic. Of course, supporting Israel doesn’t automatically absolve him of antisemitism or excuse him for promoting antisemitic themes.

It does show a lack of judgement though; it’s as though he believed he could simply assume that his record of ‘non-antisemitism’ would be enough ensure that if he made a casual, snarky allusion to ‘greedy Jews’ it would automatically be contextualised by readers, perhaps forgetting that not every reader would be familiar with his personal history.


Amol Rajan kept saying that the piece was incoherent. I’d have liked to hear him flesh that out more.