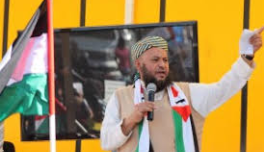 To state the obvious, some news stories interest certain media outlets more than others -  for whatever reason.

The Daily Telegraph, the Daily Mail and the Jewish Chronicle, for instance, are currently reporting that a Muslim hate preacher from South Africa called Ebrahim Bham (notorious, among other things, for saying that Jews are "fleas") will be addressing the Palestine Expo at the Queen Elizabeth II Centre in London this very weekend.

This event is taking place within what the Telegraph calls "a prominent Government building", despite (a) Mrs May's "Enough is enough" speech and (b) reports that sections of the Home Office wanted the Government to cancel the event.

That story strikes me as one a national broadcaster like the BBC should be urgently reporting and discussing but, as far as I can see, it hasn't crossed their radar at all.

Or perhaps it has crossed their radar but they see no reason to report it.

The story raises all manner of important questions - e.g. Is the UK's tolerance of Muslim extremists harmful to the UK? Why are people like Robert Spencer and Pamela Geller banned from the UK while people like Sheikh Ebrahim Bham are freely allowed in? Why is free speech allowed to some (enemies of the West) but not to others (friends of the West)? What does 'Enough is enough' mean in this context? What is it with Islamic preachers and antisemitism? Etc.

Important questions for Radio 4's Sunday and BBC One's Sunday Morning Live I would have thought?
Posted by Craig at 16:10