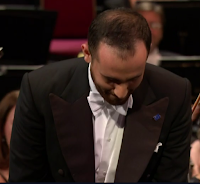 The Guardian has a gleeful write-up of pianist Igor Levit's pro-EU encore after his performance of Beethoven's Third Piano Concerto at the First Night of the Proms last night.

Mr Levit, sporting an EU pin throughout, returned to play part of Liszt's transcription of the 'Ode to Joy' from Beethoven's Ninth Symphony - aka 'the EU anthem' - with added improvisations of his own.

He was making a point.

According to the Guardian, Mr Levit "sneaked" it in:

The BBC News website's own account, however  - headlined 'EU anthem played at Proms' first night' - makes it clear that Igor Levit did not 'sneak' it in at all. He had the BBC's consent in advance to do so:

What next? Nigel Kennedy improvising variations on 'Oh, Jeremy Corbyn!' after a performance of Khrennikov's First Violin Concerto while sporting a 'Jez We Can' pin?

That said, Igor Levit's performances of the Beethoven Third Piano Concerto and the big tune from the finale of the Ninth were so good that I'll let him off.
Posted by Craig at 11:46