Ian Katz gets his own accountability interview

Talking about Ian Katz, the Newsnight editor was interviewed by Samira Ahmed on this week's Newswatch.

Viewers had complained to Newswatch about Newsnight presenters (specifically Emily Maitlis, though I'd have included Evan Davis in that too) pushing a relentlessly negative line on Brexit and being rude and aggressive during interviews with politicians such as Theresa May and Andrea Leadsom, and hairy-chested Ian was on to defend his interviewers.

I've seen many an interview on Newswatch where BBC editors say that the BBC got it right but few BBC editors could match this performance by Ian Katz for complacency and sheer arrogance. On that front this was a bravura performance from the Newsnight man, but it also turned into something of a car crash too.

He repeatedly asserted that the featured viewers' complaints weren't representative. (How on earth does he know? Is he basing that on what he's read on his own Twitter feed echo chamber?)

Then, after scoring a debating point over the use of a single word by his critics, he later fell victim to his own arrogance by getting tangled up over another single word. All credit to Samira Ahmed for spotting that and making him squirm over it.

Look out for his use of the carefully-chosen phrase ‘the continent we’re in’ to describe the EU-UK relationship. Is that merely a figure of speech? Or  goes it give us a glimpse inside BBC groupthink where the iron logic of geography makes ‘being in Europe’ appear existentially inevitable and immutable and 'not being in Europe' appear perverse? 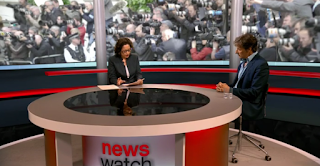 Samira Ahmed: Well, with me right now is Ian Katz, the editor of Newsnight. Ian, thank you for coming on Newswatch. The reference that Andrea Leadsom made to patriotism has been much mocked, but some viewers say she really did have a point about the focus of Brexit coverage being relentlessly negative.
Ian Katz: And the first thing I should say is I thought it was an excellent accountability interview. I think...I'm sure there are some viewers out there who will agree with some of these complaints. I think the vast majority of people who saw it will think that calling an interviewer 'unpatriotic' when they ask some awkward questions is sort of somewhere - somewhere between hilarious and slightly sinister. It's the sort of thing that happens in Moscow and Beijing, but not really in a place with a free media.
Samira Ahmed: Well, there is an interpretation issue there, because of course Andrea Leadsom went on to say that she wasn't calling her unpatriotic...
Ian Katz: (interrupting) I don't think it's really open to interpretation. You only have to watch it to be pretty clear, and the viewers that you have just reported the complaints of were actually making the point that it was fair to call Emily unpatriotic.
Samira Ahmed: Newsnight is very good at turning around this kind of interview as a social media clip, to go viral, which is exactly what happened. But watching it back, on the whole, the whole of it, do you not see how many viewers felt it was heavy-handed?
Ian Katz: Well, I think if you are making a point about partial extracts from an interview, and how some of those can gain circulation outside the context of an interview, I think that's a really interesting one. And that's one that we really need to think quite a lot about, because sometimes you'll have a sort of minute-long fragment from an interview which gets seen by huge numbers of people, outside the context of the interview. I think that's an interesting point. But I think that, you know, this was a classic accountability interview on a really momentous issue. I mean, this is about the future shape, relationship, of the country with the continent we're in, and it's absolutely right that Emily conducted a really tough, hard-hitting accountability interview.
Samira Ahmed: We all understand that politicians can go on too much, they can need to be brought back to answer the question. But there was a lot of interrupting here. We heard that one viewer there at the end say it's really frustrating not getting to hear Andrea Leadsom finish her answers.
Ian Katz: Well, you know better than anyone, interrupting is a really sort of fine line in interviewing. I've got quite a lot of sympathy with viewers who feel that we're sometimes too interrupt-y. I mean, we owe subjects the sort of fairness of allowing them to set out their case. Set against that, there are, I won't name any names, lots of interviewees who essentially come into an interview with the aim of sort of filibustering their way through it, and just sticking to two or three homilies...
Samira Ahmed: (interrupting) But in this case?
Ian Katz: Well, this was a very interesting case, the Andrea Leadsom case. It was supposed to be a 15-minute interview. For reasons to do with when Andrea was able to start it, it ended up being a much shorter one. It was more like seven or eight minutes, and it was a down-the-line interview. And in those situations, the interviewer is under a lot more pressure to keep the interview moving along, and to address all the questions they are trying to address in the interview.
Samira Ahmed: Let's move on to another issue. Last week we featured complaints about another interview Emily did, with the Prime Minister, about the Grenfell fire. Let's watch a clip.

Theresa May: We have yet to find out what the cause of the fire was. The fire brigade, the fire service, are doing that...
Emily Maitlis: (interrupting) You could have stopped it spreading by spending £2 more on the cladding.
Theresa May: The fire service are looking at what the cause of the fire was. And it's important that we get to the bottom of this, that we find out exactly what happened. That's why...
Emily Maitlis: (interrupting) But you were recommended this in 2013. You were in Government there, and the coroner said you can stop this with a sprinkler system in every block.

The criticism there is she seemed to be putting personal blame for everything on Theresa May. The use of the word "you," particularly in relation to who bought the cladding, and that viewers felt just wasn't fair.
Ian Katz: Hmm. Well, the figure of speech I think Emily was using was, "you could do this," as in, "one could do this." She was saying, "One could have bought a more expensive cladding"...
Samira Ahmed: (interrupting) But "You could have spent £2 more", I mean...
Ian Katz: (interrupting) It's in the same way as you say, "You can get up", you know...
Samira Ahmed: (interrupting) Well, you've got the Prime Minister... I think what viewers were saying is some of that focused anger perhaps should be directed at the right people, that this is a scattergun approach. Save it for the council.
Ian Katz: Well, I don't think that's right. The Prime Minister is also the leader of the Conservative Party. It was a Conservative borough. It is entirely reasonable to say, 'There is a set of responsibilities that lie with national government, with local government. You are the leader of the party that runs the council'. It was absolutely appropriate to hold her to account. I think, in that particular case, I don't think what Emily meant was [pointing] "you personally chose the cladding". I think what she was saying is, "One could have build different cladding for £2"...
Samira Ahmed: (interrupting) Well, language matters, doesn't it? And what you think she said is not what viewers felt they got out of it.
Ian Katz: Well, clearly you're right that clearly some viewers construed it differently. I don't think the majority of viewers will have construed that way.
Samira Ahmed: Tone is also very important, and a lot of viewers said it came across as angry and emotional. Isn't it a BBC journalist's job to remain very calm and measured?
Ian Katz: I think that's a good question, and I think it often is, and I think... But I think one of the responsibilities of an interviewer to is channel the questions that the viewers would want asked in a particular situation. And I think that, on that Friday, Emily brilliantly channelled the - the questions, the mood, to some extent, of a lot of the country, around the handling of the aftermath of that disaster.
Samira Ahmed: Nothing you would do differently, looking back?
Ian Katz: I think they were two really exemplary interviews.
Samira Ahmed: Ian Katz, thank you very much.
Posted by Craig at 08:01