Come along my dear! 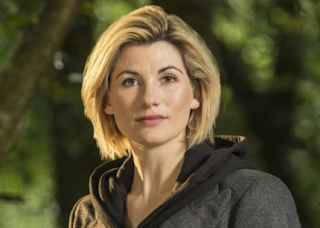 So now we know. The new Doctor Who is a woman. Peter Capaldi will regenerate into Jodie Whittaker, the star of Broadchurch.

Coincidentally, the new (roadrunner) showrunner of Doctor Who Chris Chibnall was Broadchurch's creator, which is nice.

The BBC website says that Chris knew that "the 13th Doctor was always going to be a woman".

For those who might think that this post lowers the tone somewhat, here's Samira Ahmed to raise it again with her 'Collected Twitter Thoughts' on the matter (hot off the presses):

What's that I'm hearing from a generic left-wing Radio 4 comedian tonight?: Donald Trump is tweeting that it's a bad decision from the BBC, using the hashtag, #MGGA - "Make Gallifrey Great Again". FAKE NEWS!
Posted by Craig at 17:48