An awful lot of people know that 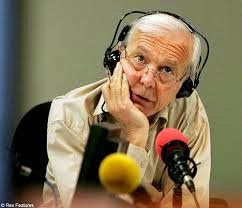 I've always felt that John Humphrys never made much of an effort to disguise his disapproval of the Iraq and Afghan Wars - or pretty much any war we've been involved in. Even now, that dovish sense of disapproval seems to keep popping up, even in the midst of barely-related discussions.

This morning's Today discussed the government's decision to allow over-50s to sign up as part-time soldiers to boost reservist numbers:

Now you've heard of Dads Army, of course. Well, welcome to Grandads Army! That's how some people are viewing the latest change to recruiting procedures for the British army. From now on people over the age of 50 will be able to sign up as part-time soldiers. Over the age of 50.

I've had a good scan around but failed to find a single one of those "some people" who are viewing the move as "Grandads army". Anyhow, they (if they exist) are only "some" people. What, according to John Humphrys, are "a lot" of people going to say?:

The army, the armed forces generally, are smaller....are getting smaller. Is that necessarily a bad thing because a lot of people will say, "Well why should we keep," I quote, the old cliche, "punching above our weight? Why do we have to do things that other countries aren't doing? Why should we be the fall guy?"

But that's only what "a lot" of people will say, according to John Humphrys. We really needed to be told by John what an "an awful lot" of people would say, and - bless him! - he soon enlightened us:

Except that you mention Afghanistan, you mention Iraq. An awful lot of people would say, "We shouldn't have been in either country".

Indeed they would, including John himself, who - as ever - couldn't stop himself from interjecting that very point.

Given the fears of some people/a lot of people/an awful lot of people (including me) that our armed forces have been made too small given the dangers we now find ourselves facing on so many fronts, you perhaps might have expected John Humphrys to have explored that angle more; but, no, he stuck to his familiar dovish guns:

But isn't there a danger, Steve, that if you have them the politicians will use them? So in other words, if you got a more modest army, or military forces, you might have more modest ambitions and that might be a good thing? Lots of 'mights' in there, but nonetheless...