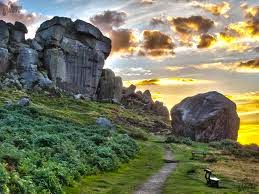 Mark Easton has been in Yorkshire today for the latest leg of his round-Britain tour. He was pushing devolution for the English regions again.

His latest TV report mentioned the two rival devolutionary "dreams" there - the first a Scottish parliament-like assembly for the historic county of Yorkshire, the second an assembly for smaller city regions. Mark talked to: Richard Carter, a campaigner who left Labour to set up the Yorkshire First party, who wants the first option; Cllr Keith Wakefield, Labour leader of Leeds Council, who favours the second option; and businesswoman Viv Parry. Both Viv Parry and Cllr Wakefield expressed scepticism about the bureaucratic implications of a Yorkshire parliament. Mr Carter was put on the defensive there - unlike Cllr Wakefield, whose proposal for a city region based around Leeds (a proposal backed by the national Labour Party) wasn't challenged by Mark Easton or either of the others.

Then it was off to a pub in Morley (near Leeds) where, according to Mark Easton, he found "enthusiasm for self-determination tempered by old-fashioned Yorkshire pragmatism". Though scepticism about bureaucracy and politicians was expressed, all three of his 'vox pops' spoke in favour of some form of devolution to the north - though they seemed to favour a regional rather than a county-wide kind of devolution. Is there really that much demand for a Northern assembly in Morley? Does regional devolution really command that amount of support in Yorkshire?

Now, that BBC poll shows that 58% of people in Yorkshire and Humberside support the setting up of an English parliament and 65% support for 'English Laws for English votes' in the area. As Mark Easton knocked both of those ideas on the head at the start of the week neither got an airing here.

All of this only adds to the strong impression of bias Mark Easton's reporting has been giving off this week.

That said, his reporting from Wales yesterday was somewhat less obviously biased.

There are two TV reports from Wales.

The first took the form of an interview with Welsh First Minister Carwyn Jones (Labour). Mr Jones, who (naturally) supports national Labour's devolution drive, was encouraged to say why Welsh-style devolution might work for the English regions.

The second report had a broader range of views, including one group of strongly pro-devolution guests and a more mixed gathering of 'vox pops'. Though Welsh devolution's growing support within Wales was reported, so were some of its downsides, including the striking statement (from Mark) that "if anything Wales is falling further behind" after 15 years of devolution. (He didn't attribute that to Labour Party (mis)rule there though).

Apparently he's off to the fair city of Edinburgh tomorrow where he will, most likely, round things off with some suitably loaded conclusions. We'll see.
Posted by Craig at 21:14