The English Question and the BBC 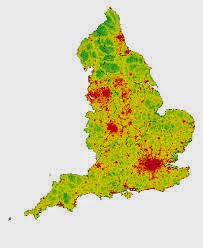 The BBC seems to be on a bit of a mission at the moment as regards 'the English question'.

Following on from Mark Easton's pouring of cold water on the idea of an England-wide parliament and 'English Votes for English Laws' and his subsequent pro-'regionalisation' tweeting, this morning's Today also rather pushed the idea of devolving power to the English regions at the expense of an English-wide solution.

You could almost see the cogs in the Today team's collective brain working away this morning.

Overnight the Independent had published a piece by historian Robert Tombs entitled Don’t wave flags and embrace immigrants if you want to be truly English. Professor Tombs argues that England has a proud history of multi-ethnicity and that “immigration is as much part of our history as thatched cottages and cream teas because of the long period with which England has interacted with both its near neighbours and more distant parts of the world”. Englishness, he says, has been “shaped not by exclusion and opposition but by inclusion and expansion”:

“Political extremism, alienation, cynicism, xenophobia - all feed off pessimism, the idea of England in decline, drifting out of control. Our history shows us that we have been a lucky and successful country. We are not a country in decline...The past should remind us that our fortunes have always been made by openness to the world”.

Is it any surprise then that within hours the BBC was on the line inviting him to give his views on 'the English question' on its flagship Today programme?

This is how Justin Webb framed that discussion this morning:

What does it mean to be English? We had John celebrating his Welshness the other day with a little help from Cerys Matthews. The Scots, of course, have been thinking very deeply in recent months about who they are. But the English... Do the English have a political, a social identity? Are we ready for the kind of regional devolution of power and identity that Scotland and Northern Ireland and to an extent Wales have? What about Cornwall, Yorkshire or East Anglia? We were talking to Nick Clegg, the Deputy Prime Minister, about the power of the Northern cities earlier on in the programme.

You will note that Justin went straight for the 'devolution to the regions' option there rather than either of the England-wide options - the same option Mark Easton appears to be pushing this week.

It wasn't only Robert Tombs involved in this discussion though. Social anthropologist Kate Fox was there too. They discussed English characteristics like social inhibition and Eeyorishness. Kate Fox suggested we have a kind of "closet patriotism", with 83% feeling "somewhat proud" of being English on occasions.

"Is being a little Englander part of being English?" asked Justin, after wondering whether we like foreigners or not.

Kate Fox suspected that the trends towards localism and regionalism (if such they be in England) are a part of the "increasing tribalism" of Western Europe.

The BBC really should bear in mind the findings of its own polling (see previous post) that 53% of English people want an English parliament running parallel to the Scottish parliament and the Welsh and Northern Irish assemblies, with Westminster acting on UK-wide matters only. They should also bear in mind that 66% of us want 'English Laws for English votes'. We also want, presumably running alongside one of the above option, most localism. Whether we want regionalism (regional assemblies and the like) is much more doubtful.
Posted by Craig at 12:16