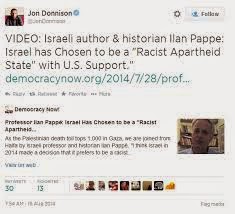 Following on from earlier posts...

So just what are the BBC's editorial guidelines as regards Twitter?

Well, one concern - especially in the light of many BBC reporters' frequent one-sided "retweeting" of non-BBC peoples' highly biased tweets (Jon Donnison's constant retweeting of articles critical of Israel, for example whilst never retweeting any pro-Israel articles, unless he's mocking them) - is that such one-sided "retweeting" might damage the BBC's 'reputation for impartiality'.

The BBC reporter's 'get out clause' is the familiar

(or variants thereon) written into their potted Twitter biographies.

But what do the BBC guidelines actually say about that?:

You may wish to consider forwarding or "retweeting" a selection of a person's microblog entries/posts or "tweets". This is very unlikely to be a problem when you are "retweeting" a colleague's BBC "tweet" or a BBC headline. But in some cases, you will need to consider the risk that "retweeting" of third party content by the BBC may appear to be an endorsement of the original author's point of view.

It may not be enough to write on your BBC microblog's biography page that "retweeting" does not signify endorsement, particularly if the views expressed are about politics or a matter of controversial public policy. Instead you should consider adding your own comment to the "tweet" you have selected, making it clear why you are forwarding it and where you are speaking in your own voice and where you are quoting someone else's.

So, if, say (picking a BBC reporter out at random!), Jon Donnison's most recent retweets and tags to third party sites on matters of politics and controversial public policy retweet or quote (without an impartial framing comment from the BBC reporter) follow this pattern:

Everyone is on script. Hamas praising the heroism of killing innocent victims, Bennet justifying the perpetuation of occupation. Sigh.
— Daniel Seidemann (@DanielSeidemann) November 18, 2014

it may not actually be enough just to write RTs, #Tags not endorsements underneath your avatar. The BBC reporter needs to also take active steps to avoid giving the impression that he or she is endorsing those quotes and retweets (steps which Jon Donnison most certainly hasn't been taking here).

But what of Hugh Sykes and his "But I am scrupulously objective when reporting - unlike some of my Tweets! I obey: "Hang up your opinions with your coat"" defence?

Are reporters like Hugh allowed to say whatever they like on Twitter, despite identifying themselves as BBC reporters in their biographies, just as long as their TV, radio and online reports are scrupulously objective?

A successful BBC microblog is likely to be personal in tone but it must not contain any personal views which would damage the BBC's reputation, for example over impartiality.

To me that sounds like a straightforward "no". Doesn't it to you?
Posted by Craig at 12:51