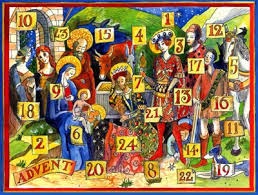 Today is (as I may have mentioned before) Advent Sunday and, even though I'm an unbeliever, I love my Christian heritage and would dearly love, like Thomas Hardy, to see the oxen kneel on Christmas Eve, hoping it would be so.

Thus, as today is the first day in the Church's liturgical calender (its News Year's Day at it were), I've been trying to write posts today that reflect a fresh spirit on my part - more Ebenezer than Scrooge (leaping ahead somewhat to the next liturgical festival).

Actually though, reading back, they are, by and large, just the same as before. So, like New Years resolutions, the best laid plans of mice and bloggers oft gang awry...

And, thus, it's onto this morning's Broadcasting House and a chance to register my appreciation of the programme for actually - and surprisingly rarely at the BBC - giving the victims of terrorism an airing. We heard from three survivors/family members of victims. The terrorists who scarred their lives were (a) the IRA, (b) the 7/7 bombers and (c) the Islamists who attacks Mumbai.

Their reflections were what I wanted to hear as it's hard to know how you'd react yourself to being personally caught up in such atrocities, especially as time passes. They were surprisingly optimistic about the future.

Paddy O'Connell drew that optimism out of them, and they all seemed free of bitterness.

The cynic in me feels obliged to wonder if that spirit was something that attracted the makers of Broadcasting House to them in the first place. If they were still bitter, if they despaired of the future, if they campaigned for justice against the IRA, if they campaigned against Islamic terrorism, if (God forbid) they'd joined the EDL, would BH have ever invited them to join the discussion then?

I rather doubt it.

Still, it was very good to hear them speak.

Also unusual was a 'good news piece' about Britain and Israel - a Kevin Connolly piece about a fascinating, swashbuckling Irish-British hero, Col. John Henry Patterson, who, amid a myriad of other heroic Kipling-like adventures, led a group of fighters in the doomed assault on Gallipoli. Among those fighters were Jewish Zionists and their bravery there won him to their cause. He campaigned for the creation of the State of Israel thereafter, dying just one year before its rebirth. So influential was he that Benjamin Netanyahu's elder brother was named after him. Mr Netanyahu himself was heard in Kevin Connolly's report, giving his appreciation of the great man, and three films have been based on his life.

Kevin Connolly's record in the U.S. certainly wasn't free from the blemish of bias - especially his insulting coverage of the Tea Party - and BBC Watch has been critical of some of his recent reporting. Both myself and Sue, however, closely monitoring the BBC's coverage of Operation Protective Edge, found Kevin Connolly's reporting to have been significantly better than that of his colleagues - so much so that we worried when he vanished from the scene and was replaced by far worse, quickly-flown-in reporters (dozens of them, including Orla, Jeremy, Jon, Lyse, Uncle Chris Cobley and all). He, at least, tried to give a sense of Palestinian aggression in the early days of the conflict and made an attempt to report the fears and feelings of ordinary Israelis in the (Hamas) firing line.

And, so, it's good to hear him doing something positive for BH that isn't anti-Israel.

On a lighter note (F sharp), I've also enjoyed BH's focus on intrusive background music. A BBC wildlife camera man sounded off on the programme a week ago about the use of emotionally-stirring music in wildlife documentaries. He didn't like it. He wants to hear the sounds of nature in nature programmes.

And BH listeners have agreed with him in their droves.

Now, this is a subject that tickles my fancy because the great David Attenborough series are full of stirring music. No Sergio Leone film is more tied into the power of music than a David Attenborough landmark series. My strongest memory is of marching crabs marching to stirring march music - and, though the music was wonderful, I did think at the time that I was being emotionally manipulated by the music and that it was too intrusive.

That said, I don't usually find it intrusive, but...

One of the glories of recent BBC Radio 4 broadcasting was British Museum director Neil MacGregor's wonderful series about German history, Germany: Memories of a Nation. It was a feast of information, engagingly written, undumbed-down.... 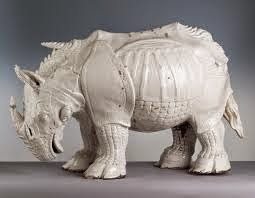 ...BUT, its soundtrack was the classical music of Germany, primarily Beethoven and Wagner - glorious works, many of which I love. The result, for a lover of such music, was deeply distracting. There was Neil telling us fascinating things about Goethe and behind him was Beethoven's magnificent Egmont Overture and I, loving the Egmont Overture, couldn't stop myself from being distracted by Beethoven. Who to listen to, Neil MacGregor or Beethoven? Move onto the 19th Century and Neil's eloquent words were battling for my attention with Wagner's anvil-banging dwarves (from Das Rheingold), music that always rivets me and sends a metallic shiver down my spine. Neil didn't always win.

I held back from moaning about that here because it seemed so trivial at the time next to the splendours of Neil MacGregor's series. But there you go. It's off my chest now. I can sleep again.

Going back to Broadcasting House, the paper review featured Bunny Guinness (Gardener's Question Time/Daily Telegraph), Chris Neill (Radio 4 comedian) and Krishnan Guru-Murthy (Channel Hamas News). They didn't like the changes on The Archers (and all of them appeared to be absolute devotees, strangely). Krishnan said he couldn't say "cock" on Radio 4, while talking about Penny the potty-mouthed Tory. Then it was onto Chris and potty-mouthed David Mellor, the second naughty Tory story in a row. More mockery of the Tories followed. Radio 4 comedian Chris Neill stood up for Emily Thornberry, after she was mentioned, and no one disagreed. Then it was onto the Turner Prize, and the usual stuff thereon - which is always fun. Chris (pretended) said he liked that kind of thing. Krishnan and Bunny said they love Banksy (naturally). Krishnan stood up for Gordon Brown before moving onto fitness bands. Chris then talked about eating out on Christmas Day (the selfish b**tards), and everyone agreed it was wrong (as do I), and then the two (PC) men fretted about separate things for boys and girls (as such people tend to fret about). Bunny, private school parents, and their "so bad" obsession with their children succeeding (boo!) followed, and Krishnan agreed there was "something odd" about private schools at the moment (it's being taken over by oligarchs and the super-rich). They then talked poinsettias.