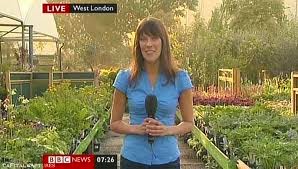 Hopping back onto the subject of immigration, this morning's From Our Own Correspondent featured a report on that subject from the BBC's new Berlin correspondent Jenny Hill (quite a promotion, given that I've always seen her reporting on 'local news'-type stories for the BBC, often standing in a muddy field or in front of a courthouse).

It was a very upbeat report, focusing on Germany's welcoming attitude towards immigrants. We also heard the appreciative views of many immigrants, glad to be in Germany.

Jenny herself sounded happiest of all, waxing enthusiastic about the smells and sounds of multicultural Germany, thanks to the EU's free movement of people.

Now she did partially quality her statement that Germany is welcoming towards immigrant, despite the record numbers of immigrants coming to the country (some 400,000 last year alone). She said that the German government "at least" is happy to see such numbers coming, to boost the skills gap and the slumping German birthrate. She also noted that a new party, Alternative for Germany, is seeking to tighten controls on immigration.

Still, she left the clear impression that this was very much a minority view in a modern Germany comfortable with high levels of immigration.

I was curious as to whether that was true, so I Googled around (as you do). Pew Global's most recent research (from May this year) suggests that giving such an impression is somewhat misleading. It shows that 44% of Germans want fewer immigrants, 40% want about the same amount of immigration and 14% want more immigrants. That suggests that a substantial minority of Germans have strong concerns about mass immigration, slightly outnumbering those who are comfortable with present levels but wouldn't want an increase. Only a small minority are in favour of even higher levels of immigration.

Jenny's report didn't give us much of a sense of that 44%'s way of thinking. She didn't pass on any conversations she'd had with such people. She merely recalled ex-chancellor Helmut Kohl's anti-immigration position as regards immigrants from Turkey and implied that his day has passed by juxtaposing her comments about his opposition to Turkish immigration with pointed references to Germany's need for Turkish immigration, imagery of "delicious" Turkish food and a charming-sounding Turkish immigrant who loves living in Germany.

Now, as a blogger who writes about BBC bias my ears have evolved over time (like a long-eared bat) to seek out the slightest traces of bias from BBC reporters, perhaps not always accurately, so I need to question myself here: Couldn't Jenny's jolly, upbeat tone merely be a reflection of her happy personality? Maybe she always sounds like that. Plus, the German government's open-armed approach to immigration and the small majority of the German public that is relaxed about the present levels of immigration there (if Pew is correct) does justify a report suggesting that immigrants are being welcomed in Germany...

...however, there were enough tricks of the BBC trade present here [the niceness of all the immigrants described, the absence of a nice counterbalancing German voice critical of the present levels of immigration, the undercutting of ex-Chancellor Kohl's concerns about Turkish mass immigration {she didn't even attempt to explain his reasoning there}, the imagery of delicious immigrant smells and delightful multicultural sounds] to suggest that a typical BBC pro-immigration bias on Jenny's part was shining through.

An anti-mass immigration bias from a BBC correspondent never shines through on FOOC. Well, at least I've never heard such a report and I've been listening to FOOC (on and off) for about thirty years. Have you ever heard one?

[There was also a report on how Malta is becoming less socially conservative, and an excellent report from Jenny's predecessor Steve Evans on the comparisons between/contrasts with Berlin and his new base, Seoul.]
Posted by Craig at 16:09

Labels: 'From Our Own Correspondent', Jenny Hill