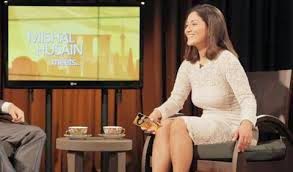 Talking of Mishal Husain and her habit of pushing one particular angle...

As we discussed yesterday (and following on from the previous post), Mishal seemed to be pushing one particular angle on yesterday's programme as well.

Reporting from Lebanon on the plight of refugees from Syria, that angle could be summed up as: Shouldn't Britain be taking in more of these poor refugees?

That seems to be a familiar default position for BBC interviewers/reporters. Rather than wondering whether we should be doing more to support the refugees on the ground or taking firmer action against their oppressors, it seems to come naturally to them instead to leap straightaway to the presumption that the 'something' which 'must be done' is to bring them all here - regardless of any consideration of how they would fit into the UK and whether they might bear us ill will (despite our generosity) - as others in their position have done before (despite our generosity).

Having discussed that here yesterday, I came across this Twitter exchange today which, I think, reinforces the points made above. Mishal Husain does seem to have been on a mission yesterday and that didn't go unnoticed by an influential campaigner: