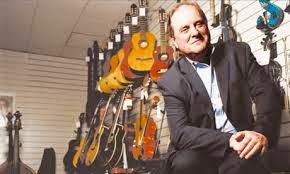 One definite example of presenter bias on Today is the way James Naughtie manages to smuggle pieces about classical music onto the programme. He's been getting away with that for years!

This morning's Today featured an interview with Prof. Colin Blakemore concerning an experiment being carried out by researchers from three universities into how we engage with music. Volunteers have been attached to various measuring devices and their heart rates, sweat levels and micro-movements have been monitored over the course of the 15 hours of Wagner's Ring cycle.

The researchers were watching out for the unconscious indicators of how engaged, excited or emotionally affected the volunteers were in order to try to work out how Wagner's music arouses audiences.

The result, which pleasantly surprised Jim, was that by the time the volunteers had got to the middle of the third opera, Siegfried (which, by my reckoning, would be some eight and a half hours in) the newcomers to the music were as emotionally engaged as the aficionados.

The implication, I guess, is that, for those new to it, Wagner's music can cast its spell on you if you listen to it for long enough (for hours and hours and hours).

Whether this is really something that startling I'm not sure. I've long found that immersing yourself in particular composers, singers, groups, even if they are completely new to you, always wins you round to them if their music has enough character, complexity and variety for your to keep finding fresh things in it.

Is there some connection to the mental processes involved in brainwashing?

Anyhow, if you've a spare 15 hours, a few scientists and some medical equipment then strap yourself in and off you go!...

P.S. I made the mistake whilst uploading the above video of landing on part of it and pressing play - the bit (for aficionados) where that big lummox Fasolt is getting all misty-eyed over the fragrant Freia - and have now got stuck on listening to it. There's over 14 hours to go. Must stop, must stop...got to go out tonight.
Posted by Craig at 10:15