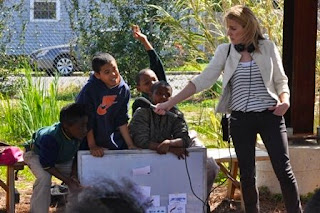 Credit where credit's due to Today's Zoe Conway.

Zoe made it clear from the start of her package on this morning's Today that the audience was "overwhelmingly" from the Bangladeshi community. Mayor Rahman is frequently accused of favouring that community.

She also described the speeches as "arguably rather provocative", specifically citing Livingstone's call to "fight on all fronts". (Her cautious BBC-style use of "arguably" didn't disguise the fact that she clearly thought it was provocative.)

That is really was provocative is, I would say, undeniable - though the word I'd use is "inflammatory". This is what 'Cuddly Ken' said:

When these commissioners [from PricewaterhouseCoopers] turn up, find out where they live and then have a peaceful demonstration outside their homes so their neighbours know these are the kind of people who overturn a democratically elected mayor. Make their lives intolerable. This is an appalling situation.

[If people can be hauled in by the police for tweeting derogatory comments or reading Churchill speeches in public, then how on earth can Ken Livingstone be allowed to get away with that?]

Zoe next pulled the rug out from under Lutfur Rahman's defence:

And what followed was even more remarkable.

Braving what must have been a highly intimidating atmosphere, Zoe challenged Messrs Livingstone, Galloway and Rahman. She completely exposed Livingstone's bullshit, beginning with the words, "That's not true! That's not true!" (I've never heard a BBC reporter speak to Ken Livingstone that way before) before taking on Galloway and Rahman. By simply repeating her point that the auditors had found evidence of possible fraud, their guff fell flat. Good on her!

"This is much more than a local news story", she then told Justin Webb, proving her point by pointing out the frankly staggering fact that Tower Hamlets council has a budget of £1 billion.

Her discussion with Justin ended with the following damning words:

We would like our own interview with the mayor but unfortunately so far Mayor Rahman has not agreed to an interview.

Now, I suspect the presumption of many of us would be that the BBC would have inclined towards lending Lutfur Rahman, Ken Livingstone and George Galloway a sympathetic ear. They are left-wing, pro-Islamist, pro-racial identity politics after all. Zoe Conway gave us a good counter-example here. (As did John Ware's Panorama some months ago).

I'm not the only one impressed by Zoe's report though. The genuinely indefatigable Ted Jeory of Trial by Jeory was impressed too: