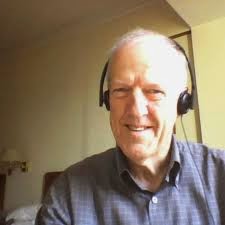 At the risk of sounding obsessive - which is something no blogger has ever been accused of before - our old friend Hugh Sykes, even before I started reading blogs about BBC bias, has always struck me as the dictionary definition of a BBC reporter - a highly intelligent, brilliantly-gifted reporter working for the impartial BBC whose less-than-neutral views, whilst reporting, have hardly ever been disguised, despite carrying the brand mark of BBC objectivity.

For me he was the voice of the BBC during the Iraq War, always working to criticise the war and berate Western foreign policy.

Hugh Sykes was always my 'main man' in that respect.

That's way I am so struck by his oddly unbuttoned behaviour on Twitter. It's as if the whole BBC has been granted the licence, informally, to let off steam and speak its mind. For me, it's like hearing 'The entire BBC Mindset' sounding off, and it's fascinating.

Maybe this blog should now just stick to spotlighting Hugh's tweets as the final conclusive proof of BBC bias, #likeshootingfishinabarrel. Or maybe it should just - case closed - have done with Hugh's tweets forever, #qed.

Anyhow, our man today, following on from his earlier anti-UKIP retweets, has posted/retweeted (among various more trivial things):
...in other words, many of the expected points of view (from my perspective) of the BBC as a whole, #BBCMacPherson, #institutionalBBCbias.

The other thing about Hugh Sykes is that - as a result of years of listening to him and, recently, following his tweets - I've grown to like him, so all this Hugh-bashing is sitting somewhat uncomfortably with me.

He may be a biased BBC reporter/tweeter but he's a rounded, likable human being too, #moraldilemma, #lastwordabouthugh?
Posted by Craig at 19:26