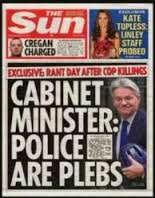 Keeping with stream-of-consciousness, a blog that monitors BBC bias should be able to 'live blog' some 'breaking news'.

I've just returned to my computer to find that an important(ish) news wave is breaking on the shoreline and various media surfers are likely to be riding it, so how is it being covered?...

I've clicked first onto the Sky News website. Its lead story is:

Judge Satisfied Mitchell Did Call Cops 'Plebs'
The judge at the former chief whip's libel trial says events "do not reflect well" on him and finds his account "inconsistent".

Now, this is a surprise. I thought Andrew Mitchell had pretty much been cleared by Channel 4's Michael Click and that the police had been proved to be lying. It looks as if that's not quite the case - if the sober judge behind today's verdict is to be believed.

As Sky puts it:

A High Court judge has said he is satisfied former Government chief whip Andrew Mitchell called police officers "plebs".
Mr Justice Mitting said he believed that the Tory MP had lost his temper during an altercation at the main gates of Downing Street in September 2012.
He said he had reached the "firm conclusion" MP for Sutton Coldfield had used the "politically toxic" word during an exchange with PC Toby Roland.
Mr Mitchell, who has been ordered to pay interim costs of £300,000, said he was "bitterly disappointed" to lose the case and said it had been a "miserable two years".
Court sources have told the Press Association the overall costs of Mr Mitchell's claim could be as high as £3m.

Right, time to check the BBC News website. How it it reporting this? More favourably to Mr Mitchell? Less favourably?

Well, it's also the main story there. I'm not surprised by that.

Intriguingly, however, the BBC's headlining of the story is less emphatic than Sky's, making significantly more use of the word "probably":

Mr Justice Mitting called the Tory MP's behaviour "childish" and said he found the MP's version of events inconsistent with CCTV footage of the row with PC Toby Rowland in Downing Street in 2012.
Mr Mitchell, who may face costs of £2m, said he was "bitterly disappointed".
PC Rowland said he and his family had been through "indescribable pain".
"I am delighted to hear again my innocence, my reputation and my integrity as a police officer has been recognised. I hope now that a line can be drawn and everyone can be left in peace," he added.he rejected a libel case against the Sun.

Neither account looks good for Mr Mitchell, though Sky's take is clearly the harsher. What's going on?

Sky is part of the Murdoch Empire, as is the Sun who Mr Mitchell was going after in this libel case. Could that account for Sky's extra harshness?

What else are the BBC and Sky up to? Well, the Sky website is also 'live-blogging' the reaction to the verdict. The BBC also has a Timeline, a profile of Andrew Mitchell, two video reports and an article called Why did the word 'pleb' matter?

For comparison, what's ITV up to?

Hmm, not good for Mr Mitchell either and as the Telegraph is leading with it too (complete with its own timelines) I hardly need look any further.

The BBC News website is certainly not going after Mr Mitchell more than other media sites then, is it?

People who favour Mr Mitchell over the police will doubtless do bitterly unto Mr Justice Mitting what the grievance-mongers around Ferguson did unto the grand jury in the Michael Brown case by 'knowing' better than those (like Mr Justice Mitting) who sat through all the evidence (on the grounds that things 'stand to reason', and that we 'know this' and we 'know that', etc), and those who (at least in this circumstance) favour the police over Mr Mitchell will doubtless be shamelessly gloating at the ex-Tory minister's humiliation and finding the judge's verdict highly congenial. Such is the way of things, and it has absolutely nothing to do with questions of BBC bias.

If you spot anything biased (media-wise) as this story develops, please feel free to point it out below.
Posted by Craig at 18:44