I’m not the only one who’s keeping an eye on Gregg Carlstrom, the freelancer who writes articles about Israel for the Times.
I see CiF Watch’s Adam Levick also noticed yesterday’s article in with the alarming headline  “Israel set to make Arabs second-class citizens.” (Page 32 under the section called “World” )  (£) It wasn’t just the font size that made the piece look alarmist and sensational. 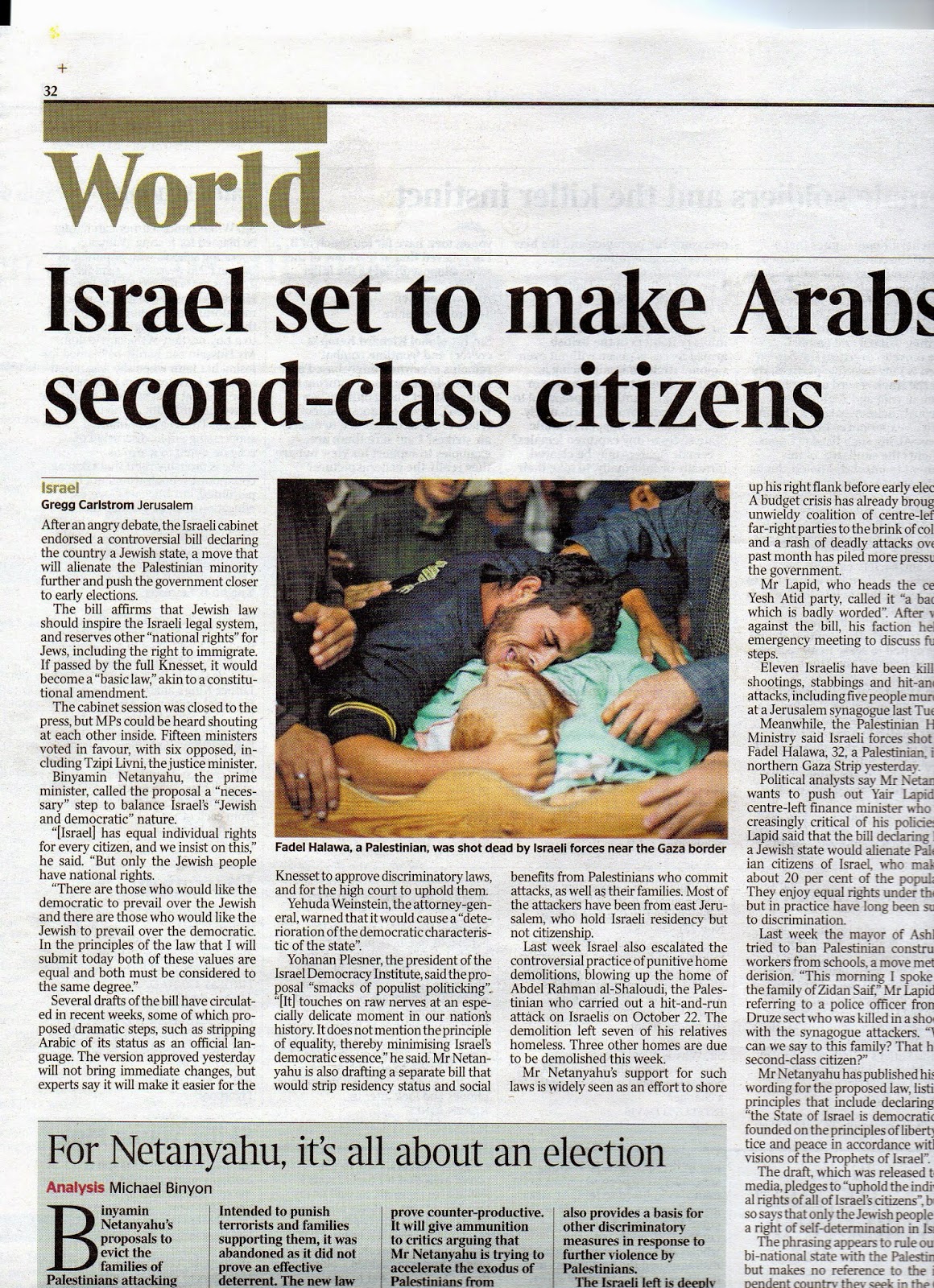 Some time ago this writer’s household had to cancel a subscription to the Telegraph after one too many obnoxious pieces from Peter Oborne. I wrote to the paper to register our dismay.  Not long afterwards the marketing department rang, as they do, to try and lure us back. Why, they wanted to know, had we left?
“Peter Oborne,” said I.
“We’ve made some editorial changes,” they said,  temptingly. “New editor and that. We’re more left-wing these days.”

Hmm. I wonder if Gregg Carlstrom is  going to prove to be the Oborne that broke the camel’s back. As Oborne is to the Telegraph, so Carlstrom is to the Times? I hope not.

I don’t expect Carlstrom was responsible for the headline, and I must admit that it did make me read the article more attentively than I otherwise would.  I have to say the actual headline bore little relation to the content (muddled) Neither did the somewhat gratuitous picture of Palestinian farmer Fadel Halawa, deceased, apparently shot by the IDF.

Does the name Carlstrom have the whiff of the jackboot about it or is it just me and the paranoia? Anyway, the piece begins:

“After an angry debate, the Israeli cabinet endorsed a controversial bill declaring the country a Jewish state, a move that will alienate the Palestinian minority further and push the government closer to early elections.The bill affirms that Jewish law should inspire the Israeli legal system, and reserves other “national rights” for Jews, including the right to immigrate. If passed by the full Knesset, it would become a “basic law,” akin to a constitutional amendment.”

I see the online version has another illustration. 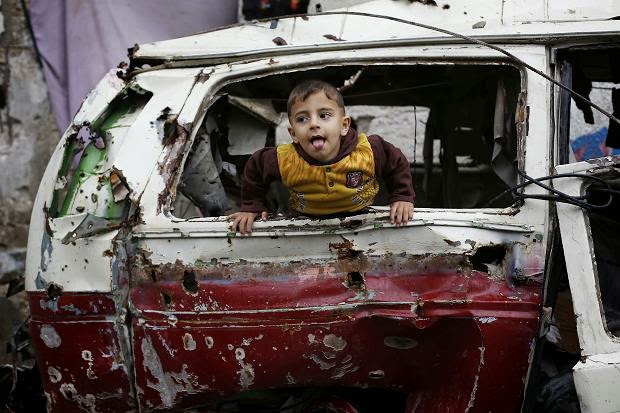 A Palestinian boy plays inside the wreckage of a car in Gaza city (next to houses that were destroyed)AFP/Getty.

What is going on here? Blimey. Anyhow the boy, who looks about 6 years old, appears to be delighted.
Are these pictures trying to convey a message? Oh dear.

Actually, at this stage the debate in the Knesset was just that. A debate. No apartheid law has been brought in. It’s a debate about democracy, equal rights, the nature of the ‘Jewish’ State and discrimination. A debate that would be unthinkable in any Islamic state, at which the world doesn’t seem to bat an eyelid.
According to Carlstrom: “The version approved yesterday will not bring immediate changes but experts say  it will make it easier for the Knesset to approve discriminatory laws and for the high court to uphold them.”
Don’t we just love ‘experts?”
The article includes some ‘background’, political. (“It’s the upcoming elections, stupid” ) as well as the customary emotive statistics, hence the illustrations.

So is this another step towards the “Judaization” of which Yolande Knell and co write so disapprovingly? Is it mere provocation for ongoing Palestinian fury?

The BBC hasn’t reported any of this, so far as I can see (perhaps it has mentioned it on the World service?) but Al Jazeera had a fairly even-handed discussion about it which included a mention (from the anchor) of the elephant in the room, i.e. the Islamic nature of Israel’s neighbours.

Watch out for it on the Beeb.

There was an interesting thread on Harry’s Place about this issue. Blogger and regular contributor to Harry’s Place Marc Goldberg wrote about this proposed new law in his characteristically angst-ridden style.

“As a Jewish Israeli this bill doesn’t give me anything I don’t already have and caters to a fear that doesn’t bother me. It does however serve as a slap in the face to Israeli Arabs attempting to integrate into Israeli society. An extra little reminder from the government that they’re not wanted in the modern state of Israel. It’s a shame. Particularly at a time when Israeli Arabs actually seem to be coming more into the fold.”

Fundamentally Goldberg is a staunch  Zionist, but his criticisms of the Israeli government, albeit well-meant,  are beginning to look a bit disloyal. No matter how affectionate and constructive a given criticism might be,  in a particular context it’s often wise to keep them ‘within the family’.
As far as Israel is concerned, all criticism is a potential gift to the enemy.   The argument in the btl comments on that thread seems to be whether or not Harry’s Place is enough of an ‘insider ‘- a family member - to bear what might be considered internal wrangling, by airing its dirty linen in public, without undermining  its delicate fundamentals; whether, as far as pro-Israel site Harry’s Place is concerned, Israel’s reputation can withstand continual bashing from one of its own.
Problem is, if you criticise the critic, you’re damned as an unreasonable ‘Israel Firster’, and if you don’t the world just grabs the criticism and runs away with it.