The BBC and Har Nof

Just to add a few thoughts to Sue's post on Tuesday...

Geeta Guru-Murthy's brutally short interview with Israeli Minister of the Economy Naftali Bennett (apparently immediately following an interview with a Hamas spokesman) has drawn a lot of criticism. 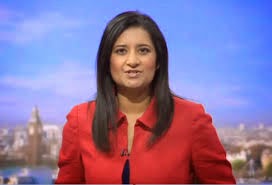 The rudeness of a BBC presenter interviewing an Israeli minister is nothing new. However, it can still take you back when it comes in the immediate aftermath of a shocking terrorist incident like the Har Nof attack. Nothing seems to inhibit the Israeli-baiting tendencies of some BBC (and Channel 4) interviewers when they have an Israeli spokesman in their sights.

Nor is the BBC's pushing of a false but potentially damaging allegation against Israel anything new either (cf Jon Donnison). Here Geeta Guru-Murthy pushed the discredited but potentially inflammatory Palestinian charge that a man who recently committed suicide was murdered by Israel. Again the shock of this fallacious whataboutery comes in its timing. Untrue as it is, she was straight in there with it (without batting an eyelid).

The part of the interview that has provoked the most controversy however is the moment when Mr Bennett held up a photograph of the scene of the attack which included one of the victims. Geeta Guru-Murthy curtly interrupted, saying “Sorry, we don’t want to actually see that picture: if you could take that down.” (You'll note the lack of a "please" there).

I myself am loathe to see such images broadcast without warning, but - putting aside the presenter's rudeness - the thing many (including Hadar at BBC Watch and Alan at Biased BBC) are finding galling and hypocritical is that the BBC clearly felt few qualms about broadcasting equally graphic images during the recent Gaza conflict, including footage from a morgue - footage fronted by the BBC's Middle East editor, Jeremy Bowen.

Jeremy Bowen himself wrote a BBC News website article 'explaining' the background to the attack which seems to me to typify his reporting. His focus isn't on the victims of the attack but on the grievances of the Palestinians, beginning with the failure of peace talks.

His phrasing of the passage about the "calls from hard right-wing Jewish nationalists" for Jews to be allowed to pray inside the Muslim-controlled Temple Mount compound gives unjustified credence to the Palestinian scare-mongering over the issue and undermines the Israeli government's firm - and firmly believable denials (given their past record) that any such move would be permitted.

In contrast, the Israeli charge that Mahmoud Abbas and his Palestinian Authority have been inciting violence over the issue (by calling for "a day of rage" and praising recent terrorists as "martyrs") are undermined and President Abbas given a free pass and presented as a moderate "who has said many times that he is against the use of violence" - a moderate faced by an angry public.

I read Jeremy Bowen's article at about the same time that I read Sky News' Sam Kiley's take. At least Sam Kiley notes that "On the West Bank, knife attacks on Jewish settlers have become routine". (He also notes that the Har Nof attack "looks like something from an Islamic State manual of terror").

The Haaretz-reading BBC man's endless emoting about Palestinian suffering and point-scoring against Israeli politicians/spokesman increasingly knows few bounds. His latest BBC-emblazoned tweets on the issue (from unrepresentative Israeli left-wingers and like-minded BBC colleagues) make it clear where he stands (not that BBC reporters are supposed to 'stand' anywhere):

Plus a couple of retweets:

What the Israeli & Palestinian people need now to break this cycle of violence are strong principled, visionary leaders. Neither have them.
— Paul Danahar (@pdanahar) November 18, 2014