How to interview a 'Clockwork Orange' politician? 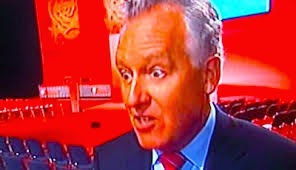 You're probably all well aware by now of the BBC's highly public internal debate about how political interviews should be conducted.

Some want to maintain the old Paxman-Humphrys model ('interrupt hard and often') while others [Today editor Jamie Angus and Newnight editor Ian Katz among them] want to adopt a less confrontational style and let the politician have his or her say, hopefully in return for greater openness from the politician.

Newsnight has been leading the way here, pioneering a much more 'hands off' manner of interviewing, but Today is obviously following suit.

Today's Today, for example, featured interviews with several politicians - Labour's Clive Soley and Peter Hain and the Conservatives' Ken Clarke. All were carried out by Justin Webb. None were conducted in a confrontational way.

Well, I can see why some people would feel like that.

However, my initial reaction to hearing Peter Hain's foam-flecked, hyperbolic claptrap was to think, "What a d**khead!", and then to assume that his semi-rabid ranting was so full of silly, OTT, dishonest, emotive claptrap that no Radio 4 listener who wasn't already a similarly foam-flecked, dyed-in-the-wool left-wing activist would find it in any way persuasive and not fail to see that his 'baby-eating-Tory'-bashing was a blatant diversionary tactic to avoid the answering questions about Ed Miliband's leadership abilities.

Now, am I taking the average Radio 4 listener's intelligence for granted there? Or are most Radio 4 listeners actually so dim-witted that they can't see through a ranting, wriggling politician without having some BBC interviewer constantly interrupting him and pointing out his dishonesty and evasiveness for them?

In other words, did Justin Webb give Peter Hain so much rope that he hung himself with it? And, if so, was that Justin Webb's intention or merely a happy accident? Moreover, wasn't it - whatever the intent behind it - more revealing (and damaging) than the old Paxman-Humphrys way of interviewing by the process of constant challenge?

However (he says, slamming on the brakes)...

What to make of Justin Webb saying, after one Peter Hain rant, "You're angry, aren't you?" (or words to that effect)?

Mr Hain replied, "Yes, I'm angry" (or words to that effect) and went off on one again.

To me it seemed quite clearly like faux anger, a politician's fake outrage, a diversionary tactic from Peter Hain. I didn't believe his anger. Why then did Justin seem to take it seriously and give it credence? If that was part of the 'non-confrontational' approach, wasn't that taking it too far?

However (he says, further slamming on the brakes)...

Was my reaction to Peter Hain really as typical as I hope it was? Did lots of listeners actually think he really was angry? Did his unchallenged tale of a cancer-suffering constituent dying in poverty at the hands of the wicked Tories and their nasty, nasty cuts actually make droves of Today listeners instantly pledge never to vote 'baby-eating-Tory' again?

And from another angle, as a commenter at Biased BBC wonders, couldn't/shouldn't Justin have countered Mr Hain's Daily Mail-bashing (he blamed that bogey-paper for being behind the anti-Ed stories) by pointing out the New Statesman's recent Ed-bashing?

And yet more questions to conclude: So what is the right way to interview a politician? If a politician starts party political point-scoring in order to avoid answering the question, should that politician be challenged and forced back to answering the actual question? Or should the audience be allowed to pass their own judgements on such politicians in the quiet of their own homes (or cars)?
Posted by Craig at 11:38