An inclusive Songs of Praise 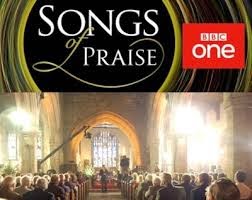 Switching on BBC One's Breakfast programme this morning I caught a report from the BBC's Caroline Wyatt about today's new-look Songs of Praise.

Just to remind you, Aaqil Ahmed, the BBC’s Muslim head of religion, has given Songs of Praise a make-over. No longer will we see editions broadcast from a single church or cathedral but instead the programme will be broadcast from multiple locations each week, including Pentecostal, Roman Catholic and Salvation Army churches. It will also include “magazine-style” reports on topical issues such as the persecution of Christians in the Middle East.

Mr Ahmed's declared intention is to draw a larger audience, including immigrants from Africa and eastern Europe.

Caroline Wyatt's TV report was wholly positive about the change, as is her online version. The latter states unambiguously that

Those who have grown up watching Songs of Praise say they are looking forward to a more inclusive programme each week.

To which I'd ask: What, everyone? Has everyone really been inwardly clamouring for a more "inclusive" Songs of Praise for years, and is now seeing their dream come true?

Besides Mr Ahmed, we heard from theologian Dr Dulcie Dixon who expressed her delight at having more black people like her on the programme, and from the Church of England's director of communications, the Reverend Arun Arora, who gave the move the Anglican Church's stamp of approval.

Aaqil Ahmed insists that the programme will not include other faiths (a promise to cut out and keep for future reference):

Not in a million years. There are lots of other multi-faith shows on the BBC, but Songs of Praise is a Christian music show.

Mr Ahmed specifically cited the persecution of Christians in Syria as an example of the kind of story that will be covered, though I'm betting it will be a matter of mere weeks before some sob story about the Palestinians makes its appearance - something, perhaps, along the lines of: There were smiling Palestinian shepherds abiding in the fields, keeping watch over their flocks by night when, lo, a mean Israeli settler came among them and they were sore afraid.

Will we have to start monitoring Songs of Praise for BBC News-style bias next?
Posted by Craig at 10:26