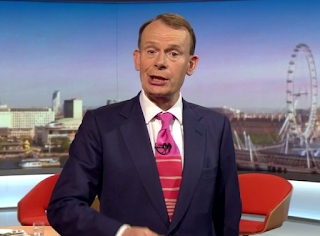 One way to look at the question 'Is the BBC biased?' is to list all the questions put by a particular BBC interviewer on a particular subject over a short (or long) period of time and see if they show evidence of bias.

Well, here's a list of all the Brexit-related questions/comments put by Andrew Marr during his one-on-one political interviews throughout the last three editions of The Andrew Marr Show. Do they show a pro-Brexit or an anti-Brexit bias, or no bias either way?

I'll add my own verdicts in italics after each list. Do you agree with them?

P.S. Only one of the seven interviews was with a declared Leave voter (Michael Gove). All the others were declared Remain voters (however John McDonnell actually voted).

[Update: This P.S. reads badly. I wish I hadn't added it.

If there's one thing you can say in defence of The Andrew Marr Show - and I've said it often enough myself - it's that their (party political) guest selection is usually well-considered and carefully balanced. The main political parties, and most of the smaller political parties in Westminster, are lacking in pro-Brexit voices, but, to give credit where credit's due, the AM show does try to keep up a decent tally of pro-Brexit voices.

The perspective the questions were put from here came from the pro-'soft Brexit' standpoint.

From the 'Remainer' language of the first question here to the questions based on alleged negative effects of Brexit, this also largely came  from an anti-Brexit or pro-'soft Brexit' standpoint, with only Q4 suggesting the contrary position.

Questions to Vince Cable:
The questioning here, though brief, came from a pro-Brexit perspective, if only negatively so - (i.e. nothing positive about the possibilities of Brexit just questioning of Sir Vince's behaviour). The third question, however, was a plug for a pro-EU centre movement, so could be put in the anti-Brexit column.

*****
Questions to David Lidington:
This interview, despite Q7 being put from a pro-Brexit perspective, tilted heavily towards being anti-Brexit, with the final question - " Do you think a big new trade deal with Trump’s America, for instance, could make up most of the damage done by leaving the EU?" - being particularly striking in that respect.

Questions to Stella Creasy:
The questioning here, though brief, came from a pro-Brexit perspective. The final question began an angle that Andrew Marr was to pursue at length with Jonathan Ashworth later in the same edition.

Questions to Jonathan Ashworth:
The questioning here began with the angle that the Labour leadership is anti-EU and that that's embarrassing for people like Mr Ashworth (especially having Nigel Farage praise Jeremy Corbyn) and not good news for young pro-Remain voters, from whose standpoint the questioning appeared to come. Andrew also openly expressed an opinion here, saying that the Labour manifesto did not commit Labour to leaving the Single Market. ("I thought the manifesto was a fudge on that matter, but that’s my view.").  That, of course, isn't the view of those who say that 80% of voters in the general election voted for parties that committed us to leave the Single Market.

Conclusions: Andrew Marr didn't ask all of his questions from just one perspective and there is evidence here of some impartial, 'devil's advocate' questioning. But they were fairly rare moments, and...

Please read the questions for yourselves though and see if you agree.

If I'm onto something then this exercise would be worth widening and deepening.
Posted by Craig at 15:49