Well, everyone else has had their say, so...


The BBC 'top talent' salary thing has provoked a right old rumpus. Everywhere I look people have been writing about it.

I haven't had the time to look into it very deeply myself, so I probably shouldn't say anything about it (and don't have much to say anyhow) - but, as this is a blog, that's not going to stop me!

So what's the scandal?

Is it the gender disparity thing?

Or is it that the salaries of men and women at the empire-building BBC are over-high, with overall pay rates 40% above commercial-sector pay for equivalent jobs?

Or maybe the real scandal is the fact that BBC salaries are funded by an over-coercive BBC licence fee - a situation which, astonishingly, found 184,595 people across the UK charged with non-payment of the TV Licence last year - 140,000 of whom were taken to court? And of those (Dame Jenni and Jane, please take note), 101,000 women were found guilty - around three-quarters of the total.

Notoriously, for many a year it's been reported that one in ten of all criminal prosecutions in magistrate courts in the UK concern alleged non-payment of the BBC licence fee. The lack of huge public outrage over that fact remains somewhat bewildering. As far of those prosecutions are concerned, there's obviously something deeply rotten in the state of the BBC.

(Maybe Panorama should investigate. Or John Sweeney on Newsnight.)

Meanwhile (h/t David Keighley at News-watch), a voice curiously missing from the debate has been that of Sir David Clementi, who seems to have become 'The Invisible Man', despite previously having defending BBC stars' high pay. And even more curiously, I can't find anyone in the media (or elsewhere) who's even given him a single thought over the past few days. And he's the BBC Chairman. Quite remarkable.

Ah, but the Evening Standard reported that someone has thought about him after all. MPs are going to grill him and Lord Hall about BBC pay. So he's going to have to say something on the subject. And, it's to be hoped, about BBC bias too. Has he 'gone native' yet?

Hmm. The BBC is advertising for a new managerial role - a Problem Manager. Seriously.

An open letter calling on the corporation to tackle gender disparity in BBC pay has been signed by the following:

Not everyone is sympathetic: 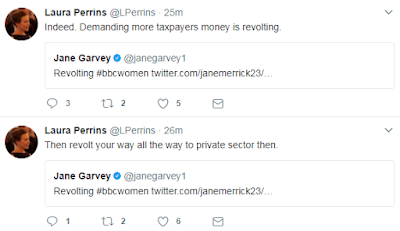 And here's Rod Liddle on the matter: