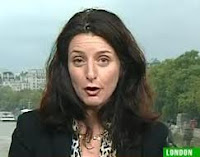 Gavin Esler's guests are the inevitable Abdel Bari Atwan, Thomas Kielinger of Die Welt and, in an absolutely classic Dateline move, Michael White...of the Guardian and Rachel Shabi [above]... of the Guardian.

I can hardly wait for their discussion of the arrest of David Miranda, Glenn Greenwald and the Guardian.


(Please imagine music playing while you're on hold on the phone)


Well, how did that particular discussion go?

The opening couple of minutes went surprisingly well, with Michael White and Gavin Esler being quite fair-minded in their initial discussion of the story, but the programme then reverted to type as Michael White of the Guardian concluded his opening pitch with "We're [i.e. the Guardian] winning this argument".

Thomas Kielinger agreed, though he preferred to phrase it as the government having lost the argument.

Rachel Shabi of the Guardian thought the Guardian has behaved in completely the right way and rejoiced in what Edward Snowden and Bradley Manning have done.

Who would have expected such a positive outcome to the discussion - from the Guardian's perspective - would come about from inviting two Guardian writers to appear on the panel of Dateline? [Not that they mentioned that Rachel Shabi is a Guardian writer though, and she didn't think it worthwhile to declare an interest either].
Posted by Craig at 13:08