Scotland, the monarchy and the BBC 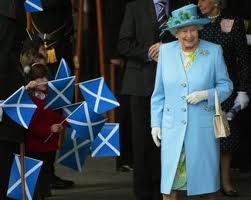 Following on from a comment on an earlier post about Newsnight Scotland, the programme began the week with a full-length debate on the monarchy, hosted by the BBC's Glenn Campbell.

The programme duly focused on the issue of monarchy itself rather than on Scottish independence but, given that the programme forms part of a series of specials in the run-up to next year's referendum, it's probably right and proper to include it in my review of Newsnight Scotland's coverage.

Did this edition display any bias - whether that bias be for or against the monarchy, or for or against Scottish independence, or for and against any particular party?

Well, for starters, I must say that it was an interesting debate to watch, with more light than heat being shed - unusually for many a BBC current affairs debate. I enjoyed watching it.

The range of opinions on the panel could hardly have been more carefully balanced. The panellists were (in order of introduction):

There was, however, a fifth guest, who was introduced as the programme's academic adjudicator - its historically-informed referee - Dr Jenny Wormald of Edinburgh University. She said late on in the programme that she'd been asked to be uncontroversial by Newsnight Scotland but she expressed some pretty concrete opinions nonetheless. I'd have liked to have heard more from her as she was woefully underused; however, the things she did say left me in little doubt that she was pro-monarchy and, so, introduced a pro-monarchy imbalance.

What of the questions from the audience? Did the programme select a fair spread of pro-monarchy and anti-monarchy questions?

Judge for yourselves. These are the six questions selected:

1. "What do you think we need a monarch for?"
2. "Does the panel agree that the monarchy more than pays its way when we compare the cost to the taxpayer to the revenues it brings into the country?"
3. "If the Scottish public were to vote yes in next year's referendum would the people of Scotland be given the chance to vote in another referendum on whether the monarch should remain as head of state?"
4. "In the past week my family has extended itself a bit further. My nephew's got a beautiful bouncing baby boy and my niece also delivered a beautiful boy as well, but none of these made the media or got any coverage at all. Curiously enough. Does the panel think the coverage given to the recent addition to the Royal Family was fair and balanced or was it indicative of an inherent bias in the BBC for all things royal?"
5. "We live in a multi-religious and non-religious society. Is it appropriate that the monarch is the head of the Church of England?"
6. "If we accept Dennis Canavan's proposal for an elected head of state whose name - other than the Queen's - would the panel like to see on the ballot paper?"

I'd say that's a reasonable mix of questions.

Was the audience biased? That's hard to judge. The BBC insists it is scrupulous in balancing its audiences for these type of programmes, but quite a lot of viewers remain unconvinced. How to judge? Go by the applause perhaps? Well, the applause was rare but it went to pro-monarchy speakers. How about counting the pro-monarchy and anti-monarchy points raised by audience members? Sixteen audience members made points; however, some were rather ambiguous and hard to label as plainly 'pro-monarchy' or 'pro-republican'. Three were definitely pro-republican, five definitely monarchist, three more sounded as if they were republican questions and five more sounded like monarchist questions. Totalling up, that makes 6 anti-monarchy questions (I think) and 10 pro-monarchy questions (I think).

Was the presenter biased?

Well, interruptions are one way of assessing bias. The other way is to assess who was on the receiving end of the questions (many of which didn't come about as a result of interruptions). Who, among the panellists, was 'in the dock?', so to speak.

The answer to that was clearly Christine Grahame of the SNP. Glenn Campbell questioned her far more closely than he questioned anyone else.

So I say. But what evidence do I have for that (beyond the evidence of my own eyes and ears?)

Well, I could simply list all the points Glenn put to each panellist. Then you could judge whether I'm right - or not.

"But why haven't you been able to persuade your own party of that? Obviously the party's position is for the monarchy to continue?"
"How quickly would you want that vote to take place?"
"OK, but the question was 'How soon would the vote take place?'"
"Don't you think that would bring in extra revenue?"
"Yes, but just looking at the numbers, Christine Grahame, that £200 million figure is a figure used the campaign group Republic but we've already quoted figures from the consultancy Brand Finance saying £1.5 billion."
"Visit Britain in 2010. Visit Britain estimating that foreign tourists visiting sites associated with the monarchy generated £500 million of spending."
"Christine Grahame, that was the policy of the SNP, which is obviously the main force in the independence campaign. Is it still the policy?"
"Can I just follow up with Christine here because you were quoted last year saying that there would be a referendum, that that was the policy of the SNP?"
"....but you were wrong?"
"But in fairness this is all channels, and all publications gave this major coverage."
"So you were watching!!!"
"OK, you can save the rest for her campaign - should it be required."

"The figures that I have here from a consultancy called Brand Finance estimates that the monarchy will contribute £1.5 billion to the British economy in 2013 and has a value going forward of more than £50 billion. That would seem to be good value against the figures that you've just quoted to us".
" And your view Vince on whether, if there was a 'yes' vote in the independence referendum, whether we should have a vote on the monarch thereafter?"
"You don't want referendumitis to set in?"
"But fair to say you disagree with your party leader on this issue, with your UK party leader on this issue, in the way that Christine does with hers as well?"
"And is the breadth of opinion, the range of opinion as mixed and varied as Christine says it is in the SNP within the Labour movement?"
"It was the days before that...there was quite a lot of airtime that seemed to be required to be filled."
"Are you happy with the monarch being the head of the Church of England?"
"So you would like the role dis(established?)..."


"He's the chairman of the 'yes' campaign who says he favours a referendum after the independence vote"
"Wouldn't Jackson Carlaw be on the ticket as well - and win?"
"Is it OK for the royals to be part of our celebrity culture, if that's what you're describing it as?"
"But haven't they, in very short order, in consultation with all the other countries of the Commonwealth managed to change the nature of succession to allow first-born females to succeed?"
"Pretty swifly done, wasn't it?"

"There are occasionally royal scandals too!"
"I want very briefly...I want to ask you a slightly different question because we're running out of time on this question, that somebody who's pro-independence and pro-monarchy, do you think having the chairman of the 'yes' campaign throw in the idea of a referendum on the monarchy is helpful or not?"
"OK, you though the coverage was fair and balanced?"

As you can see the anti-monarchists got tougher questioning than the pro-monarchists and Christine Grahame of the SNP was interviewed much more challengingly than her Labour pro-independence colleague Vince Mills (indeed, some of the questions to Vince Mills were hardly that helpful to the SNP either).

Well, that's my take on things. Please make of it what you will.

The answers to the final question - "If we accept Dennis Canavan's proposal for an elected head of state whose name - other than the Queen's - would the panel like to see on the ballot paper?" - provoked some revealing answers. Jackson nominated Alex Salmond (in the spirit of irony). Christine went for Annie Lennox. Vince went for another singer, Michael Marra. Michael went for the Jacobite pretender Sophie von Liechtenstein.

Of that lot I'd personally go for Sophie. Hail Queen Sophie.
Posted by Craig at 16:55