In the footsteps of William Crawley

Much of this morning's Sunday with William Crawley followed the agenda outlined on their website - and in the previous post. Two items got dropped though - David Willey's report on corruption at the Vatican (which may have been the same one broadcast on yesterday morning's Today), and the feature on Betty Maxwell's ecumenical work. The late Mrs Maxwell made way for a discussion on Northern Ireland.

Here's an outline of today's programme.

7.11 Should politicians 'do God'? In the wake of someone asking David Cameron, "What would your response to Jesus be on his instruction to us to sell all our possessions and give the proceeds to the poor?", and the prime minister's "busking" of a reply [as William described it], William talked to U.S. conservative commentator Charlie Wolf and asked him to compare the situation in the in the UK with that in the U.S. Mr Wolf finds neither David Cameron nor Barack Obama very convincing when they attempt to 'do God' - unlike, say, Mike Huckabee or George W. Bush - and doesn't think Mr Cameron would go down very well in the U.S. (especially because of gay marriage). The socially and politically conservative Charlie Wolf is not the sort of 'expert guest' you would normally expect to appear on Sunday - unless he was to appear 'in the dock' on some issue. 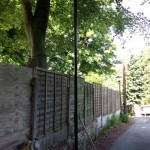 7.17 The Manchester Eruv. Kevin Bouquet reported. Most members of the Jewish community there are delighted at the new eruv, though there are "some objections too". We heard only from its supporters - four of them in all. We heard of the objections of a particular orthodox rabbi, however - on the grounds that the eruv doesn't conform to Jewish law - but the rabbi in question chose not to appear on the programme. It was good to hear a largely positive report on something relevant to the Jewish community here in the U.K. There haven't been very many on Sunday in the last three years.

7.23 The Burka Avenger. The starting point here was a "non-violent" cartoon character (in a burqa) campaigning for women's education in Pakistan - she throws books and pens at the baddies [so not entirely non-violent then!]. This feature looked at how cartoons can be used to promote a "human rights message" [as William put it]. We heard from Christian cartoonist Alex Baker and Muslim cartoonist Zaineb Latif. The both approve. Zaineb is a burqa defender, dismissing the concerns of human rights activists that 'The Burka Avenger' reinforces the suppression of women. What of "the famous or infamous Danish cartoons" [WC]?  They crossed the line for both of them. Zaineb [whose cartoons tackle Muslim grievances in UK - such as the cartoon she did attacking Jack Straw for criticising the burqa] disapproves of them. Alex [who like to do the odd anti-Israel cartoon from time to time] says cartoonists shouldn't be insulting. This feature was much more what I'd expect from Sunday.

7.30 Were women airbrushed out of Christian history? Feminist historian Kate Cooper's new book was the starting point here. Kate discussed the types of women who have been airbrushed. Was this "silencing of women in history" [WC] deliberate? It was probably done, she said, to project an image of the early church as being about tough, heroic men doing good. She thinks the church in the UK is doing so badly because of the perception that it's "anti-women". This feature was much more what I'd expect from Sunday.

7.35 E-mails. A selection of e-mails about last week's programme. The first was was unimpressed with Paul Nicholson - the retired vicar who is refusing to pay his council tax in protest at the Tory cuts. He didn't object to Rev Nicholson on political grounds but because he'd said something negative about atheists. The second e-mailer criticised the programme for not challenging the liberal perspective of another of last week's guests, while a third said the programme should remember that Quakers support gay marriage.

7.37 The Copts. This was an interview withYoussef Sidhom, editor of the Cairo based Coptic newspaper 'Watany'. He said the Copts are facing a difficult time and being targeted by Islamists. "Payback?", asked William - for the Coptic pope's support for the ousting of Morsi. Mr Sidhom outlined examples of the "continual attacks", mentioning the al-Qaeda black flags placed on attacked churches. Upper Egypt is where the worse anti-Christian attacks are taking place.

7.40 In the footsteps of St Paul. The first of a two-part report on the 300-mile trial in Turkey which tracks the route St Paul may have taken. Bob Walker meets the people behind the project. Kate (an "atheist" and "friend of Turkey") is the chairman of the society behind the project, promoting its economic value. Professor Mark Wilson stressed its "transformative" spiritual value and noted that, after Israel, Turkey has more Biblical sites than any other country.

All in all, a more varied edition of Sunday than usual. Let's hope it stays that way.

Update: If you want some examples of the cartoons of Zaineb Latif and Alex Baker, here they are. They weren't easy to find. So, what first attracted the BBC to these two particular (obscure) cartoonists? 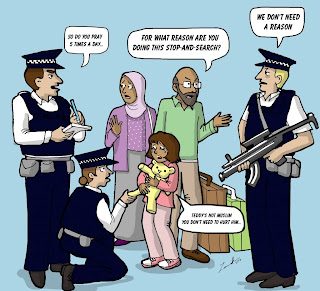 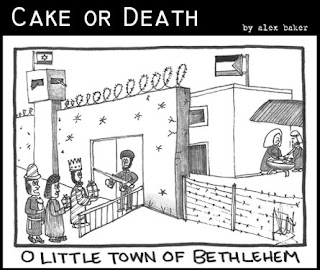