The Daily Mail, of course, has its own agenda over the growing hacking scandal surrounding law firms, blue-chip companies and celebrities over their alleged use of private detectives to hack, blag and steal private information. The Mail is clearly using the story to undermine Leveson. Moreover, the Mail is also taking the opportunity to bash its enemies at the BBC and the Guardian.

Still, none of that means that the Mail doesn't have a point when it writes:

Hacking: Why the silence of the Left?

After almost six weeks of deafening silence, the Guardian and the BBC finally make passing references to the revelations that law firms, blue-chip companies and others routinely hired private investigators guilty of hacking, blagging and stealing private information.
What a contrast to the hullabaloo they raised two years ago, when they devoted oceans of ink and hours of airtime to the narrower scandal of voicemail hacking by rogue elements of the red-top Press.

To borrow a phrase from a Guardian headline, attacking other newspapers for failing to clear their front pages for the NoW story: 'Why the silence?'
Isn't it hard to avoid the conclusion that the Left-wing media's crusade for Press curbs was driven less by horror of hacking than hatred of viable papers that express popular opinions contrary to theirs?


Is that fair? As the story has gathered pace in recent months, have the BBC and the Guardian really been downplaying it? Using only the search techniques provided by 'Google', is it possible to either back up or refute the Mail's charges?

It's interesting that the Mail doesn't include the Independent in its criticism. The Independent most certainly has been covering the story. Back on 22 June, its article The other hacking scandal: Suppressed report reveals that law firms, telecoms giants and insurance companies routinely hire criminals to steal rivals' information laid out the allegations of criminal activity on the part of companies and of the failure of Serious Organised Crime Agency (SOCA) to take action. A suppressed official report had been leaked to the Independent. Two days after that article its editorial thundered, "Other hackers need scrutiny too: As this newspaper has revealed, Leveson ignored evidence that most theft of private information was carried out on behalf of law firms and large corporations." The paper has since pursued the story tenaciously. Here are just a few examples (with links): 27 June, 1 July, 7 July, 19 July, 20 July, 23 July, 25 July, etc, etc; indeed, I count 27 important articles on the story in the last couple of months - many of them major 'exclusives' by the paper. 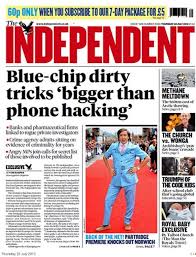 The Daily Mail itself has covered the story extensively too. It immediately reported the Independent's scoop on 22 June: 80% of hacking was by lawyers and major firms... and the Leveson inquiry knew all about it. Its editorial the following day, Lawyers, hacking and a conspiracy of silence, marked the start of its own tenacious coverage of every twist and turn in the scandal. I count some 25 major articles on the subject over the last couple of months, spaced (like the Independent) at regular intervals.

What of the Guardian? Is the Mail's charge against them true? Well, 'yes' is the short answer to that - except that the Guardian did publish one article on the story back on 22 June, when the Independent first broke the story: Soca alleged to have suppressed report of hacking by companies and law firms. Illegal activity by private investigators appears not to have been published to home affairs select committee. Thereafter, there was indeed - as the Mail put it - "almost six weeks of deafening silence" from the Guardian until 31 July the the first of 4 major articles appeared. So that's just 5 such articles in total from the Guardian.

What of the BBC News website? Are they 'guilty as charged', like the Guardian? Well, almost. The BBC didn't report the Independent's story on 22 June. They waited until three days later: MPs consider hacking claims against other industries (25 June) - the latest of all the media outlets reviewed. [As I was monitoring Radio 4's PM throughout the latter half of June and the start of July I know that they didn't cover the story at all]. The BBC News website did, however, report the story again twice during those "almost six weeks of deafening silence", both times on 2 July: Soca defends response on lawbreaking private eyes and a piece by Tom Symonds (BBC Home Affairs correspondent) called Rogue private eyes: The next hacking scandal? Thereafter there were 27 days of silence until 29 July, when the coverage began again with 6 further articles - making a total of 9 in all. During those 27 days of silence though there were 5 more major articles on hacking within the Murdoch empire. Given the way most twists and turns in the News of the World story got top billing on BBC One's News at Six, it was revealing that this story only managed 8th place on the 31 July bulletin, just prior to a Rihanna story.

So there's certainly plenty of evidence to back up the Daily Mail's charge that the BBC and the Guardian, who pursued the Murdoch empire so relentlessly over the hacking allegations against them, have been seriously downplaying this latest (non-Murdoch-related) hacking scandal.

The Mail has a stab at explaining why: The BBC and the Guardian aren't interested in the story because...well...because they have no interest or 'interests' in it. Is that really why they've both been playing it down? If it is then that's surely something of a scandal in itself, isn't it? [The Guardian, of course, is a private company and can report what it wants to report. The BBC isn't. It's a publicly-funded corporation with editorial guidelines].
Posted by Craig at 11:11