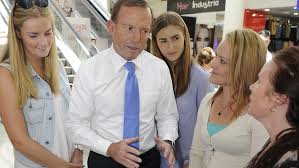 A few days ago we did a piece about how the BBC's biases were already making themselves evident during the corporation's initial coverage of the Australian federal election.

Among the points made was that stories about 'gaffes' by right-wing politicians are standard fare when it comes to the BBC's foreign coverage - as the BBC seems to love such stories.  'Gaffes' by left-wing politicians, in contrast, barely get a mention. That opening week's coverage went overboard on one such right-wing 'gaffe' story (concerning a minor candidate from a minor party). "More of the same should probably be expected over the next month," was the post's closing prediction.

That was last Sunday. So, has the coverage between then and now borne out this 'more of the same' prediction? Or not?

Well, the next flurry of articles came on Tuesday.

First up was a piece by Jon Donnison, Where should you put your wisdom? - a post about Australia's leading right-wing politician, Liberal leader Tony Abbott, and a 'gaffe' he made mixing up "suppositories" with "repositories". This article ended, in absolutely classic biased BBC fashion with, "It's led to unfortunate comparisons with the master of the political slip of the tongue, George W Bush."

Then later in the same day Jon Donnison returned with a second article, Abbott accused of new campaign 'gaffe'. This time Mr Abbott had said that Fiona Scott, one of his party's female candidates (who he was out campaigning with), has "a bit of sex appeal". (You can see her to the right of Mr Abbott in the picture at the top of this post). Cue reminders by JD of the accusations of misogyny made against Mr Abbott by Julia Gillard. As you might recall from last next's post, however, JD failed to post an article about a leading Labor candidate having been forced out for calling a female opponent a 'slut' (which seems to me to be far more clearly misogynistic).

Onto Wednesday and the BBC had a new article about the Ozzie elections. Guess what it was about!: Australia election: Tony Abbott 'sex appeal' comments under fire, following up the same 'gaffe' story.

Later that same day, Jon Donnison was back and what did he want to report on this time? Tony Abbott's 'fashion of the moment'. Here JD seized on Mr Abbott "describing gay marriage as the fashion of the moment" to raise another 'gaffe' charge against him.

All three of JD's articles about Tony Abbott's gaffes have a tinge of mockery to their humour - at the Liberal leader's expense - and they followed on, you will recall, from the week before's spate of Jon Donnison articles about an obscure right-wing candidate for a tiny party who'd made some 'gaffes' about Islam. So, 'gaffes' by right-wing politicians clearly are Jon Donnison's main theme at the moment.

He's only been reporting from Australia for two weeks now and yet has obviously slipped straight into the generic mode of biased BBC reporting for foreign elections.

Still, at least he's now given it a rest for a few days. His only subsequent post (from Thursday), How much?, concerned the cost of living in Sydney, especially for students.

The other articles about the Australian election on the BBC News website concern immigration and all come from yesterday - a full-length article, Australian election: Tony Abbott proposes tough asylum measures, and two video reports related to it. There's not much wrong with any of these.

So, what insights into the Australian election will Jon Donnison be bringing BBC website readers next week? How's Labor's campaign going so far? What are the polls suggesting? What are the big issues? Of course, he could just stick to reporting any other 'gaffes' by right-wing politicians that crop up.
Posted by Craig at 08:24