The BBC has avoided examining the most crucial implications of the election of Iran’s new President, Hassan Rouhani. 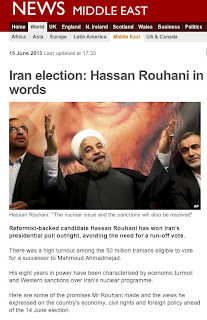 Iran’s ongoing nuclear aspirations have been alluded to, as have Iran’s prospective relations with the West, particularly the US, but Iran’s uncompromising attitude towards Israel has been overlooked by the BBC. James Reynolds has also been reporting on Rouhani. I heard him again this morning.

In one BBC article he writes:” The day before he took office, Mr Rouhani said Israeli occupation was an "old wound on the body of the Islamic world", as Iran marked its annual Jerusalem (Quds) Day.”
Not only overlooked, but manipulated, as the stealthy insertion of the word “occupation” will attest.  H/T  Mladen Andrijasevic

Rouhani and the Ayatollahs agree with the majority of the Islamic world, that Israel’s  very existence is an ‘occupation’, and the ‘resistance’ is to the concept of Israel as a Jewish state, and not merely resistance to Israel’s defensive occupation of certain geographical portions that have been decreed “Muslim Lands.” Two-state solution? Not bloody likely.

So Rouhani, or “Hassan” as the students at Glasgow Caledonian University were encouraged to call him as they chatted chummily over this and that in the canteen, is quite a fan of the West. The BBC’s Richard Galpin has filed a number of reports about  Rouhani and his allegedly West-friendly attitude.
PM featured an item (42:30) about Rouhani’s time as a post-grad student at Glasgow Caledonian uni, graduating as a Doctor of Philosophy with a thesis on Islamic or Sharia law. The Director of the university library has the actual thesis, which people are apparently very keen to see in the flesh.

“The thesis seems to show that he’s got quite a flexible and perhaps modernising outlook” the librarian says, loyally.
In what direction will he take Iran? wonders the BBC presenter, Richard Galpin. As if we didn’t know.Off to visit professor Hassan Amin, another Iranian, one of Rouhani’s  academic supervisors. 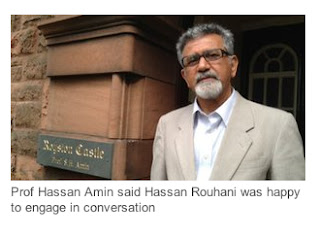 ‘He was quite happy to be regarded as  a student,’ reminisces Prof Amin. “They would just call him Hassan, he didn’t wear a turban, he would eat in the canteen and would engage in a conversation with them even though he was quite an important figure in Iran”.
Has it created a bond with Great Britain? wonders the BBC presenter, hopefully.
“He chose Great Britain because he had respect for the legal system here, the judiciary”  Professor Amin assures us.Yes, he’s quite a fan of the West after all, it seems. Or does it.
“To what extent is he going to bring serious change to Iran now, to ‘free up the system?’ “ continues the presenter on behalf of the BBC, who wishes to show what a friendly, pro Western fellow Hassan-the-lad really is.
“I am very hopeful that he will be successful in delivering the promises that he has made to the nation, however I wouldn’t say that it would be an immediate change, it has to be a gradual change towards an Iran of sustainable development and good relationship with the rest of the world. But it would be gradual.” He’s represented as all smiles, with plans to persuade the Ayatollahs slowly but surely to extend the hand of friendship to the Western world. 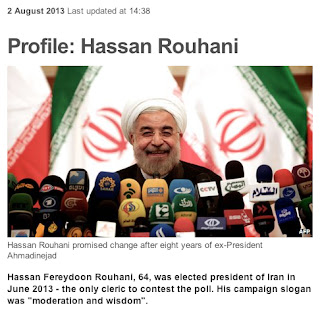 Galpin continues:
“The reformist groups that rallied round Mr Rouhani during the election campaign surely hope he’ll end repressive policies at home and engage with the West. Former ambassador to Iran Richard Dalton urges caution, saying Mr. Rouhani is loyal to the Islamic republic and the supreme leader Ayatollah Khamenei, although he is a pragmatist: “He’s best described as a man of the centre, with excellent political links to all parts of the political spectrum in Iran. His maxim will be more ‘Let’s go for what works’ than to respond to a preconceived reform platform.”“For the international community the biggest issue is whether there can now be a negotiated solution to the crisis over Iran’s nuclear programme. Sir Richard Dalton believes that could happen during Mr. Rouhani’s presidency” concludes Galpin.

Political prisoners.“There are presently 800 political prisoners in Iran, including  journalists, lawyers, human rights activists, bloggers, feminists, Christian priests, Sunni clerics, the entire leadership of the Bahai faith in Iran, and others. Rouhani has intimated that he is in favour of securing their release.” Well, he would say that.
Relationship with the Leader.That’s Supreme Leader Ayatollah Ali Khamenei. The press admits that he and Rouhani are ‘close’ but the BBC seems to think Rouhani will act as an ally to “us in the West,” gradually persuading the old fellah to loosen up. I have no idea what makes them think he will do this; other than wishful thinking.
The economy.It’s all about sanctions my dear Watson. Perhaps Rouhani will get them lifted if he asks us  very nicely.
The Nuclear stand-off with the world powers.“Mr Rouhani has said that it is possible for Iran to maintain its nuclear programme and at the same time reassure world powers. He has suggested that Iran may be more proactive in the talks, and more transparent in its nuclear activities. He said he wants to arrive at a position of mutual trust with world powers.”What can I say?
Relations with the outside world.He wants to make friends with Britain, then America.

So no mention of Israel there then.

“Arguments against military intervention are boosted by speculation that Iran hasn’t got nuclear weapons yet, and is a long way off acquiring them. People cite Iran’s repeated reassurances that their nuclear activities are one hundred percent peaceful; yet still they retain, as back-up, the theory that even if the Iranians have lied, perish the thought, diplomacy and sanctions will rescue us.This argument comes with yet another back-up. If Iran has been fooling us all along, and should sanctions and diplomacy fail, we can always fall back on Mutually Assured Destruction – the all-time, ultimate deterrent. However, in a country ruled by people who are awaiting the End Times with joyous anticipation, an event that entails the coming of the Shia Mahdi accompanied by the apocalypse, the Mutual part of this deal doesn’t seem quite so relevant. Which just leaves the Assured Destruction.”

As the man says, MAD is Dead.

This brings me back to the matter of the BBC and why it considers the issue of Iran’s acquisition of nukes less unthinkable than I do. It’s because they’re not convinced of / don’t really believe in/ Israel’s right to exist.  That uncertainty underpins all their Middle East related reporting.

Even if they are more aware of the need to conform to  the impartiality obligations in the BBC charter,  the BBC’s Supreme Leaders evidently share with their posse of on-the-ground reporters a superficial, partisan understanding of the core issues.

Jewish history seems a dry subject, as does religious and political history as a whole, and a lack of curiosity in addition to a willingness to swallow Arab/Muslim propaganda lock stock and Bowen has resulted in the current mismatch between the BBC and an increasingly suspicious public. (such as the viewers who voted so overwhelmingly against the BBC’s subliminal pro-immigration lobbying on the Sunday Morning Live immigration poll.)  Ha very ha.

This explains why the BBC appears uninterested in Iran’s ability to carry out its threats against Israel.  As far as they’re concerned sacrificing Israel would be a small price to pay for the perceived benefit of  good relations between the Western and Islamic worlds, because they’ve substituted wishful-thinking for reality. If a by-product of this imaginary shangri-la is the healing of an “old wound”, why complain? They doubted its right to exist all along.

Update. I wish Tim Marshall worked for the BBC.