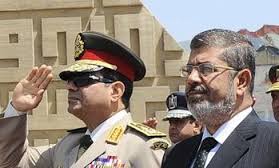 Today's Dateline London (minus Gavin Esler) was an unusually feisty and rewarding affair.

Much of it was taken up with a discussion of this week's violent events in Egypt and it began with an impassioned contribution from the programme's regular Egyptian contributor, Abdallah Homouda.

This came across as something of a cry of frustration at the way in which the events have been covered by Western media organisations, and Mr Homouda gave me the impression of being distinctly nervous about presenting his own point of view on the BBC today - given the BBC's own recent reporting.

Here's as exact a transcription as possible (sorry, but a couple of words eluded me):

I was concerned yesterday when I was told that I would come to the programme because I felt that I could be a lone voice in a tide of Western media which is barraging Egypt these days.

I find it really difficult to say that..er..

They massed their members in two areas around Cairo. They made life difficult for everyone.

Everyone forgot that there were 45 days of agitation, contrary to the narration in the West.

In the West they played on the fact that they are against the military and for democracy and in Cairo they were speaking about the Islamic estate and the Islamic identity of Egypt and that Western democracy is a heretic civilisation.

They spoke about the Coptic Christians in Egypt as 'casual citizens'. 'Casual citizens' could go anywhere, but Egypt is for them only and not for everyone else.

It is amazing that the Left and the Right both in the West are so naive, or they have their own self-interest. The Egyptian people are beginning to feel, in a way, under attack, xenophob....sorry, I can't say the word...yeah, xenophobic.

The military just set the scene to reboot the democratic process. The new president is by the default constitution the head of the constitutional court, so he.. [came?]. A new government has been appointed of technocrats who are well-respected around the world and the army is guarding from as far away as possible, leaving the security forces to direct the situation.

The 45 days of agitation threatened everyone, 'We either control you or kill you', and encouraging their own members to play martyrdom, and embarrass the Egyptian authorities in the world.

What I can say is not enough.

I have a list of 45 churches around Egypt which were burned.

Today I'm going to interview an English lady who lives in Alexandria and this lady has pictures and will give testimony. I'm inviting Nabila to come and interview her as well, just to know what is going on from someone who is not Egyptian.

The surprising thing here was that Mr Homouda wasn't a lone voice on the panel. In fact, that lone voice belonged instead to the French-Algerian Guardian columnist Nabila Ramdani.

Nabila - as you might already be aware - has been one of the BBC's most-used 'external' commentators on Middle Eastern matters in the last few years, perhaps because her views strike many at the BBC as being well-judged. (I have to say though that I usually completely disagree with her).

However, in a complete reversal of the situation I'd have expected from Dateline, Nabila Ramdani found herself ranged not only against Mr Homouda but also against Janet Daley of The Sunday Telegraph [from the Right] and Marc Roche of Le Monde [from the Left] - both taking Mr Homouda's side in the noisy tussle that ensued.

Nabila's views tallied with much that I've been hearing from the many BBC reporters and editors who have been reporting from the country over the past few days and weeks. It was most unusual to find her views so robustly challenged - and all thanks to Dateline [not something I usually find myself writing!]

3-against-1 situations on Dateline are something I usually complain about (though actually the programme's frequent 4-against-0 consensuses are my particular bugbear.), so I suppose I should be complaining about bias here too.