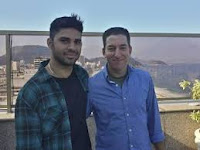 The nine-hour detention at a British airport of the Guardian journalist Glenn Greenwald's partner David Miranda under police anti-terrorism powers certainly sharply divided opinion - at least among the people who were interested in the story. (I've not personally heard anyone talk about it or show the slightest interest in it though, at work or outside of work - though that may say more about more about me, who I know and where I live than it does about the matter at hand!).

There are those who support the Guardian's position, such as Nick Cohen who thinks Glenn Greenwald and the Guardian are engaged in the right kind of investigative reporting, uncovering stories which might well embarrass the British and US governments but which are absolutely vital as they help to shed light on the surveillance state. For them the detention of David Miranda shows how sinister the British state has become, using an obscure piece of anti-terrorist legislation to get at an inconvenient journalist through his partner - a piece of legislation the state could use against any one of us at any time. Action is needed to reform Britain's counter-terror laws to prevent such unwarranted harassment, they argue.

Others, such as Douglas Murray, think the reaction to his detention has been hysterical. They don't think this could happen to any of us because David Miranda was detained with good reason. They don't particularly regard Glenn Greenwald's journalism, nor do they admire the Guardian for its own lack of honesty when breaking the story on Monday. For the likes of Douglas Murray, David Miranda was no innocent but a 'mule' acting on Mr Greenwald's behalf and being paid by the Guardian to smuggle sensitive, stolen intelligence information through a British airport - information which could be used to sabotage the British state. Britain is engaged in a fight against terrorism and has hostile foreign powers ranged against it. Secrets are necessary. They ask: Why should someone acting on behalf of an anti-Western activist-journalist (‘I will be far more aggressive in my reporting from now. I am going to publish many more documents. I am going to publish things on England too. I have many documents on England’s spy system. I think they will be sorry for what they did’) be allowed to get away with helping to undermine those secrets?

When the focus switched to Guardian editor Alan Rusbridger's revelation that the British cabinet secretary had visited him to warn against further disclosure of those secrets and that two officers from GCHQ oversaw the destruction of two hard-drives held by the Guardian, a similar divide emerged between those who saw this as an outrage - the abusive actions of a shadowy authoritarian state seeking to undermine valid investigative journalism, posing a threat to freedom of expression - and those who saw it as a reasonable act to secure insecurely-held secrets from falling into the hands of terrorists and other enemies of Britain. Some rushed to the defence of the Guardian, others denounced the Guardian for hypocrisy given the paper's lack of concern for fellow journalists employed by the Murdoch press.


The range of views found across the online media - both above the line and below the line - had been striking, especially the way they cut across traditional left-right lines. Many commenters from the libertarian Right have been at least as vociferous as those from the radical anti-Western Left in arguing against the critics of the Guardian and the defenders of the British authorities. Posters at the Daily Telegraph over the last week will be well aware of that!

The BBC certainly gave the story its due. As described in earlier posts, it gave it extensive coverage - with only the Guardian itself outdoing the corporation in terms of the amount of coverage given to the story.

As the primary focus of this blog though is the issue of BBC bias, the questions to be answered in the following posts (if they can be answered) are 'Did the BBC's coverage of this story provide its viewers and listeners with the full range of opinions?' and 'Did the BBC take sides?'
Posted by Craig at 08:16