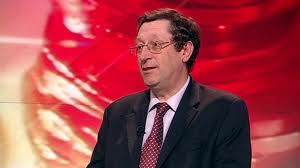 Someone somewhere will doubtless be running a sweepstake on who'll replace Paul Mason as Newsnight's economics editor.

My money's on Larry Elliott, economics editor of the Guardian, though it may well  also be worth a punt on the somewhat darker horse, Phillip Inman of the Guardian.

They could, however, go well beyond the confines of the BBC (and the Guardian) and grab David (Danny) Blanchflower from his academic position across the pond.

Danny is no stranger to the Newsnight studio and his powers of predictive insight are at least as...er...good as Paul Mason's.

Yep, I think I'll put a few pounds on Danny Blanchflower. At least if I get it wrong, I'll be in very good company.
Posted by Craig at 15:49