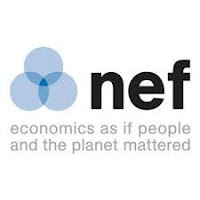 This made me smile.

The report into BBC bias by the Centre for Policy Studies - focusing on how the BBC reports the findings of think tanks from opposing sides of the political spectrum-  received wide coverage in the last couple of days, and one of the examples used was the left-leaning New Economics Foundation.

As a post here at Is the BBC biased? also showed yesterday, not one of the BBC News website's articles from the start of 2012 through to yesterday gave any political label to the New Economic Foundation (except for one use of 'independent').

Lo and behold, today there's a fresh article on the BBC News website, Could these five projects improve life in the UK?, containing more findings from the New Economics Foundation and, guess what, here's how BBC reporter Tom de Castella describes them:

Well, that was quick!

Has a memo gone out from senior managers at the BBC?

Incidentally, a CPS researcher, Ryan Bourne, makes a striking claim in the Daily Mail which shouldn't be dismissed simply because it's in the the Daily Mail:


How the biased BBC linked my free-market views to homophobia: Researcher says he was asked to debate against gay rights campaigner

“This might not be up your street [said a World Service producuer] but we were wondering whether, as a free marketeer, you would debate Peter Tatchell on our programme about whether enough is being done to combat homophobia across Europe”.
‘I was astonished. It made no sense at all. The researcher seemed to assume that because I believe in a free market economy I must also be homophobic. It seemed to reveal a deep-seated, unthinking bias against right-of-centre points of view. I am not homophobic at all.’