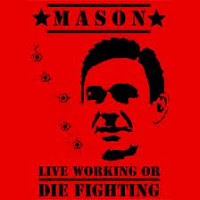 Vis-à-vis Newsnight's departing economics editor, I had to smile at this (courtesy of Guest Who at Biased BBC):

Paul Mason, Newsnight's economics editor, announced he was following colleagues Michael Crick, Shaminder Nahal and Jackie Long and crossing over to the rival team...
For [Ian] Katz [the incoming Newsnight editor] it will have been a bitter blow, although the decision is not a reflection on Newsnight's new regime but due to concerns the BBC's strict rules might inhibit Mason's future ambitions in writing and innovative story telling. Books he has previously written have been checked line-by-line by his employer, even though the BBC does not pay him for that work. (The Independent)

Isn't "innovative story telling" exactly what he's been doing at the BBC for years? Some of his coverage of the various protests around the world was certainly some species of "story telling".

And talking of Paul, I might just take this opportunity to remind you (one last time), if you missed them first time round, of some of our ever-so-insightful soon-to-ex-BBC reporter's magnificently inaccurate public predictions.

At the end of 2010 he predicted the Con-Lib coalition would fall in 2011 and that Greece would be driven out of the euro, as well as predicting ever-growing momentum for Sarah Palin to become the Republican presidential candidate. His 'name to watch' for 2011 was German central banker Alex Webber, who promptly disappeared from the scene.

At the end of 2011 he predicted "the unrest of a generation" in Iran during 2012, plus the continuation of mass street protests in Israel and even unrest in North Korea, plus the move of "the urban poor" against the system in the USA. What a year 2012 would have been if those things had happened but, alas for Paul, not one of them kicked off anywhere during that year. He also predicted an Hollande-Le Pen run-off in the French presidential election, a Greek default, the continuing relentless rise of the BRICs and the return of Silvio Berlusconi when the technocrats fell from power.

Sadly, Paul Mason chose not to make any predictions for 2013, and didn't even appear on the latest BBC Correspondents Look Ahead - perhaps because a "rather unkind blogger" had listed all his wrong predictions a week or so earlier and spooked him out making a fool of himself again?