'Panorama' - The Brothers Who Bombed Boston

It's a little late at night to draw any  considered conclusions yet, but I thought it might be helpful to provide a detailed overview of tonight's Panorama on BBC one, complete with some direct quotes from it.

The two main messages given by this evening's Panorama were right there from the programme's introduction however - and they couldn't have been clearer.

A friend of Tamerlan Tsarnaev: "I never really knew about him praying much at all".

Nichole Mossalam, Islamic Society of Boston: "If you think that there is one or two things slipping through the cracks now, it's gonna be ten times as worse if that's how they want to deal with it."

[the 'Panorama' logo then rolled] 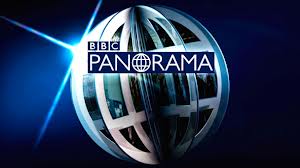 After a full  outline of the background...

We heard from one of the Tsarnaev brother's wrestling coach Peter Payack and a friend Luis Vasquez. Of the elder brother, they painted the picture of a young man who came to America and fell in love with the country.

"It was his fashion taste he stood out for, not any devotion to Islam", said Hilary Andersson.

He wanted to compete for America at boxing in the Olympics, but he was barred from contesting at a national level because he didn't have American citizenship. That's why he started hating America. Tamerlan Tsarnaev developed a passion for Islam and began reading about anti-Semitism. His wife converted to Islam.

Some of his friends are unwilling to speak publicly are they're "afraid of being associated with terrorism", said Hilary.

Jahar Tsarnaev, the younger brother, seemed a regular American teenager. Did he pray a lot?", asked Hilary. No, she was told.

Jahar had "deep strife at home" - his parents divorcing, his dad's brain tumour, smoking pot "while his brother tried to ram pot-heated religion into him" (as Tamerlan didn't approve of his party lifestyle).

Then his mother "found religion". We heard from the mother, Zubeidat Tsarnaeva, thanking Allah for helping her through all this.

We heard a brief clip of Congressman Mike Rogers stating his belief that the mother was involved in the brothers' radicalisation.

"We spoke to Zubeidat last week. She denied the congressman's allegations," said Hilary in response. [And that was that!]

Aaron Zelin from the Washington Institute for Near East Policy described Tamerlan's YouTube page. He was, said Hilary Andersson, "interested in Muslim prophecies of apocalyptic battles and in videos glorifying the Islamic struggle for independence from Russia". Russia warned the FBI after he went  to Dagestan & Chechenya. It's not clear if he got any training there, she added [and that was that too!], but the FBI missed his return - which was a "massive oversight".

"...he had frequent outbursts, angry about US drones killing Muslims and about Russia, but still he only turned up to pray occasionally at this, his Boston mosque. He had two outbursts here, though they said he never talked the language of someone who fully understood radical jihad."

We heard at that point from Nichole Mossalam of the Islamic Society of Boston:

"There would have been more outbursts than what there were. There would have been confrontations with individual members as they tried to sway people over to their side, their way of thinking. They are intolerant in all aspects of their lives. So if this was going on, whether discreetly or not, someone would have said something."

"And we found out that Tamerlan's interests here at home were not just Islamic. He subscribed to publications about government conspiracies, gun rights and white supremacy. He also read about mass shootings. Tamerlan was perhaps not so much the true radical jihadist as a deeply troubled young man who latched onto Islam."

[That shot of the anti-Semitic AFP - see the previous post-but-one has the 'conspiracies' headline clear for viewers to see but  everything at the top of the page remains blurred].

"No Islamic group has claimed any connection with the Boston bombings. The brothers became extremists in the privacy of their American home. They seem to be lone wolves."

"al-Qaeda has begun to call for lone-wolf attacks in the past three or four years and it's possible that this could have resulted in what we saw in the UK and France related into some of the attacks against the soldiers."

The programme then shifted to New York.

"But if the next terrorist is already right here, in America, operating alone, then it could be almost anyone. So how far is America prepared to go to find them? Some say it's time to take the gloves off."

"Political correctness has got to stop with regard to the war on terror. As we go forward, no holds barred. We need to infiltrate the groups we feel are threatening the American way of life".

There have been at least 40 attempted terror plots since 9/11, but several have slipped through the net. Hilary Andersson went to the control centre for the New York Police Department and spoke to Jessica Tisch of the NYPD Counter-Terrorism unit who showed her what they do.

I'll transcribe this next section in full:

"But is there more to this than meets the eye? [Cue scary background music!] The NYPD has been accused of spying on Muslims over at least a hundred mile radius. These secret documents show how the police have mapped Muslims shops and mosques, block by block, over the city of Newark so they can listen in on 'locations of concern'. Like many Muslim establishments this mosque was listed in the report. Few pray here now. Police informants have infiltrated some mosques posing as locals. Now no one is sure who is who and the mosque leaders say no one here has ever been charged with any terrorist connections. Glenn Katon is suing the NYPD on behalf of Muslims here for what he calls 'blatant religious discrimination'."

"This whole programme treats Muslims as inherently suspect, which is exactly what our constitution forbids, right. It's only Muslims. As if Muslims are the only ones who are committing, you know, criminal or even terrorist acts."

"New York's police are trying to built relations with the Muslim community. NYPD Commissioner Ray Kelly says there is no spy programme."

"The so-called mapping that we've been doing was authorised by the court to find out more information about where communities are in this most diverse city."

"I'm just trying to get an understanding of how your surveillance of the Muslim communities work. You're saying that basically the..."

"In Washington some politicians don't mine their words, saying surveillance of Muslims could stop another Boston-style attack".

"We've infiltrated drug cartels. We've infiltrated the Mafia  So what's wrong...what's so wrong with infiltrating the mosque and the Muslim community with law enforcement to try to thwart the deaths of Americans, like we saw in Boston?"

"The problem though is one of trust. At Tamerlan's mosque in Boston they say they'd naturally have reported Tamerlan if he had seemed like a radical but they said that other mosques being spied on might not feel so inclined."

"If you can't trust me I'm not gonna trust you. If I bring you information are you going to be grateful, or are you going to assume I'm in on the plot and put me in jail? [Hilary looking on sympathetically] If you think there is one or two things slipping through the cracks now, it's gonna be ten times as worse if that's how they want to deal with it."

"If law enforcement is looking for that kind of stereotypical radical Muslim and that's not who the Boston bombers were, isn't that a huge problem, because you're making that community angry and also potentially missing the real threat?"

"The Boston radicalisation of Tamerlan wasn't an isolated incident. [Hilary looking on less sympathetically] This has happened and so the Muslim community doesn't have to get angry. They can willingly assist us and provide information about..when they see bad things happening."

After bringing the story of Jahar Tsarnaev's trial and the plight of one of the victims up to date, we came to the programme's closing words from Hilary Andersson:

"A relay across America came into Boston the night before we left. Some of the victims braved coming here to the same finish line, an act of defiance in a country now living with a new kind of terrorist - the enemy within." 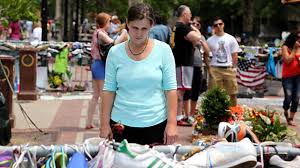 Update: Actually, I will add a few extra comments tonight.

The programme was an absolutely classic piece of narrative reporting.

The two main messages - that the Boston bombers weren't really jihadists and that America's Muslims are being victimised - were stated straight away.

The first half of the programme made the case for the first message.

A few of the known Islamist aspects to the bombers' lives were acknowledged, but many others weren't - and those of you who have been following the story closely will spot many of the missing details. Very little time was spent examining what happened in Chechenya and Dagestan, for example.

No, instead the message that these were troubled young men, lone wolves, who merely latched onto Islam was reinforced again and again. Even the 'white supremacy' angle (which the BBC website led the way in spotlighting today) turned out to be there just to re-emphasize the point that these were crazy, mixed-up kids.

Having 'established' that point, the programme moved on to its second message - that America's Muslims are being unjustly targeted by the authorities.

The narrative arc here started with a Republican congressman sounding a bit harsh. Then Hilary Andersson showed us the NYPD's surveillance programme up close, letting us see just how powerful (and potentially intimidating) it is.

Scary music starts up. 'Secret' documents have been found showing that Muslims are being spied on en masse. A lawyer protests - unchallenged -  on the Muslims' behalf.

Thus set up for a fall, the NYPD Commissioner is made to look like a liar by denying the spying Hilary has just 'shown'. She challenges him.

The mean Republican congressman returns, to more scary music, and he's introduced as 'not mincing his words'.

Hilary's narrative then contradicts him and puts the Muslims' case for them before the Muslim spokeswoman repeats it, in her own words, with Hilary's sympathetic eyes upon her.

Straight back to the Republican congressman and an immediate challenge to him from Hilary - a challenge which encapsulates the programme's two messages in a single statement:

"If law enforcement is looking for that kind of stereotypical radical Muslim and that's not who the Boston bombers were, isn't that a huge problem, because you're making that community angry and also potentially missing the real threat?"

And that's that. A quick update, and it's on to the closing 'it's a new kind of terrorist - the enemy within' soundbite.

This was an opinion piece, an argument, much more than an investigation. It had two messages it wanted to put across and put them across as effectively as it could - admitting the odd dissonant thought about Islamist influences but immediately smoothing them away to allow the full flow of Hilary Andersson's argument to reach its always-intended end point.
Posted by Craig at 22:44