Roy Greenslade of the Guardian has been complaining for two days now about the failure of the rest of the press to report the David Miranda-Glenn Greenwald-Alan Rusbridger story as if it were the biggest story of the moment.

He's certainly right that the rest of the media - with one notable exception-  hasn't shown anywhere near the same interest in the story as the Guardian itself.

For example, not a single newspaper (excepting the Guardian) featured the story on their front page this morning and I looked at the Sky News and ITV News websites first thing today and didn't find the story among the former's list of main stories and found it only a good way down the news agenda of the latter.

Roy Greenslade has had no cause for complaint about the BBC though (and, as a result, hasn't complained about the BBC). They've been leading their online news coverage plus all the main BBC One news bulletins with the story for two days now, and programmes from PM to Newsnight have covered the story in detail. The Guardian couldn't have hoped for any more from the BBC.


Compare that to the way the BBC is reporting the dramatic news story which is now leading the Telegraph website - a story with potentially major repercussions for Europe: Greece needs third bail-out, admits German finance minister: Wolfgang Schaeuble makes unexpected admission that Greece will need a third bail-out as other politicians play down the deeply unpopular prospect before German national elections.

Yes, it's on the BBC's  home page but it's only appeared at No.9 in their running order - behind a story about a new Sony Play Station (see bottom of post for a screen print of the BBC home page). They clearly think it's a less important story than the Miranda story.

They may or may not be right.

Sky doesn't reckon much to either story, while ITV this evening has begun to tilt strongly towards the BBC's position, having bagged an 'exclusive' interview with Glenn Greenwald. (It even led their evening news bulletin, having been treated as a minor story yesterday.)

Still, the BBC's closeness to The Guardian is something that often gets commented upon and this is surely another prime example of that.

OK, here's that snapshot of the home page of the BBC News website (from about half an hour ago):


No 10 'knew of Miranda detention'

No 10 was "kept abreast" of the decision to detain David Miranda, the partner of Guardian journalist Glenn Greenwald, a spokesman says. 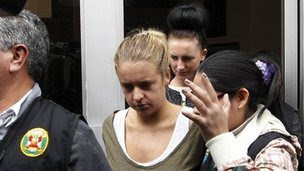 Two UK women arrested in Peru on suspicion of drugs smuggling are in court and are due to find out if they are to be charged.

The prolific US crime writer Elmore Leonard, whose books include Get Shorty and Out of Sight, dies at the age of 87.
Posted by Craig at 21:45