Not everything is political

I've long found that the BBC's political concerns have a tendency to intrude into places where you wouldn't expect them to intrude. You can be minding your own business, enjoying some history, arts, science or drama programme, when up crops some jarring political point. Then sometimes when there is a political aspect to something, thought it's not of prime importance - such as a sub-theme in a novel, or some incident in a composer's life -, that political theme comes to dominate the discussion on a BBC programme far more than it ought to.

Reading the BBC's online obituary of one of my favourite poets, Seamus Heaney, who died this week, brought these thoughts back to me again.

Though the issue of the poet's political stance towards the Troubles in Northern Ireland is something that any obituary is likely to spend some time on, given that a number of his most-taught poems (in schools and universities) attempt to grapple with his own complicated feelings about that issue, there's much, much more to the poetry of Seamus Heaney - and the man himself - than the Troubles. Much more.

Over half of the BBC's obituary concentrates on the Troubles, and other political aspects.

It may be what primarily interests BBC types, but it's not what particularly interests me - or most poetry lovers I suspect - about Seamus Heaney. For us, it's a secondary concern. 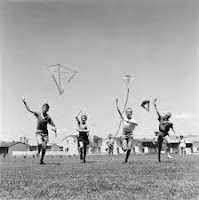 Air from another life and time and place,
Pale blue heavenly air is supporting
A white wing beating high against the breeze,

And yes, it is a kite! As when one afternoon
All of us there trooped out
Among the briar hedges and stripped thorn,

I take my stand again, halt opposite
Anahorish Hill to scan the blue,
Back in that field to launch our long-tailed comet.

And now it hovers, tugs, veers, dives askew,
Lifts itself, goes with the wind until
It rises to loud cheers from us below.

Rises, and my hand is like a spindle
Unspooling, the kite a thin-stemmed flower
Climbing and carrying, carrying farther, higher

The longing in the breast and planted feet
And gazing face and heart of the kite flier
Until string breaks and—separate, elate—

The kite takes off, itself alone, a windfall.
Posted by Craig at 15:41