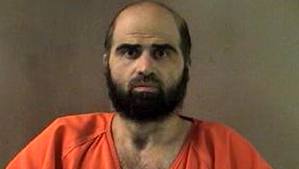 Following on from the earlier Panorama posts, it's fascinating - and not a little disturbing - to read the differing accounts of the opening day of the court martial of Maj. Nidal Hasan, the suspect in the Foot Hood massacre of 2009 which saw 13 U.S. soldiers killed and many others injured.

Fort Hood trial: US soldier Nidal Hasan says 'evidence will show I was the shooter'
Nidal Hassan, a US army major and self-styled "soldier of Allah", has spoken publicly for the first time since shooting dead 13 of his comrades in a gun rampage at a military base four years ago.

The paper's account included several direct quotes, including the following, first from Hasan himself...

"The evidence presented here will only be one side of the story. I was on the wrong side. I then switched sides. The evidence will show we Mujahideen are imperfect soldiers trying to form a perfect religion. I apologise for any mistakes in this endeavour."

...and then from the prosecutor in the case:

Then I moved onto the BBC's account. Note the missing word in the direct quotation here, as compared to what appeared in the Daily Telegraph:

"The evidence will clearly show that I am the shooter," Maj Hasan told the jury of 13, including nine colonels, three lieutenant colonels and one major.
He added: "We are imperfect Muslims trying to establish the perfect religion."

What happened to the word "Mujahideen"? The use of "Mujahideen" would mean that Hasan is explicitly identifying himself as an Islamist jihadist. Who is quoting Hasan correctly here? And why is someone misquoting him?

Similarly, compare the second paragraph from the Daily Telegraph with this one from the BBC's account:

During the prosecution's opening statements, Col Steve Henricks said Maj Hasan deliberately targeted "unarmed, unsuspecting and defenceless soldiers" when he opened fire, and planned to "kill as many soldiers as he could".

What became of "He yells Allahu Akbar" in the BBC's account?

The Telegraph, incidentally, reminds its readers that Maj. Hasan is "a Muslim born to Palestinian immigrants in Virginia" - a detail missing from the BBC account but which Sky News's report doesn't fail to include either. ("Hasan, a US-born Muslim of Palestinian descent...")

Checking different versions of stories for yourselves, thanks to the internet, can result in added confusion in the reader's mind - given the differences between various takes - but at least it teaches you not to believe everything you read and to wonder what you're missing from the particular account you're reading.

Well, yes. I was about to post this well over an hour ago, but severe confusion really did begin to creep in.

Digging a little further shows that both the Washington Post and Jihad Watch (among others) use exactly the same quotation as the BBC - "We are imperfect Muslims trying to establish the perfect religion" - and both of them cite the Associated Press as their source. So presumably the BBC is also quoting the Associated Press. If Hasan did use the word "Mujahideen" then it appears that it's the Associated Press whose reporting isn't up to scratch.

But when you look further you find all manner of variations on Hasan's statement across the media:

"We are imperfect Muslims trying to establish the perfect religion." (BBC)

"we Mujahideen are imperfect soldiers trying to form a perfect religion." (Daily Telegraph)

"We the Mujahideen are imperfect Muslims trying to establish the perfect religion in the land of the supreme god." (Atlas Shrugged)