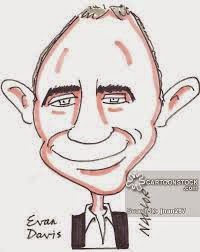 I haven't watched Newsnight much since Evan Davis replaced Jeremy Paxman and, so, was rather expecting that Ian Katz and Evan Davis would be doggedly persisting with their 'gently, gently' approach to political interviewing.

Having watched this week's editions so far though, it doesn't look as if they are.

In fact, it's been quite a while since I've heard such a pair of unfriendly, interruption-filled interviews as those between Evan Davis and Conservative MP Owen Paterson on Monday's edition (over Mr Paterson's deeply Eurosceptic proposals) and Emily Maitlis and Conservative MP Malcolm Rifkind (over the the latter's parliamentary report into the murder of Lee Rigby) on Tuesday's edition.

The sheer extent of the interruptions provoked smiling bemusement from Mr Paterson and repeated protests to be allowed to finish a single sentence from Sir Malcolm.

The Ian Katz line, widely-promulgated, was that distrustful Paxman-style confrontation was getting viewers nowhere and that politicians and interviewers should try to trust each other more and, thus, give the viewer a better understanding of the story rather than just engaging in mutually-destructive theatrical (political) entertainment.

Here it was back to mutually-destructive theatrical (political) entertainment.

What to make of them though? Well, I will admit to having been left rather bewildered by both interviews.

Besides superficial things like Evan's sprawling gestures and grey suit (a thin version of Alexei Sayle's old suit) and Emily's fetching leather trousers, all I remember from them was Owen Paterson smiling in bemusement at all the interruptions, Sir Malcolm Rifkind smiling wanly as he protested at all the interruptions, Evan Davis trying to undermine Owen Paterson's position, Evan Davis trying to get Owen Paterson to say that the EU isn't the over-regulating, anti-democratic forum that many people think it is, Emily Maitlis trying to undermine Sir Malcolm's position, Emily getting all het up about something or other being farmed out to a private (shudder!) company, and Emily finally seeming to say that she understood Sir Malcolm's point after having spent a good five minutes seemingly chasing her own tail around a line of questioning neither I nor Sir Malcolm could get our heads around.

Now, that could be a result of my own failings (comprehension-wise, attention-wise), but I'm sufficiently self-deluding to believe myself to be a good listener and I can only repeat that neither interview shed much light for me on what the two politicians were actually trying to say (or the story) and, in this case, I don't believe that that can be blamed on either of the politicians.

The interviewers were simply too distracting and too full of themselves - and whatever it was they were trying to achieve from their interviews.

Plus, also at the risk of repeating myself, I found myself more aware that Evan was trying to get Owen to undermine a key Eurosceptic argument about the EU and that Emily was trying to shame Sir Malcolm over some private sector company's involvement in something or other than of anything either of the politicians was trying to say.

If my bewilderment and vague exasperation is typical, then what did Newsnight achieve here (educationally-speaking)? A sense that Owen Paterson's proposals were fatally flawed and that both Owen and Evan think the EU isn't over-regulatory and undemocratic (which is what Evan appeared to get Owen to admit) and that Sir Malcolm's report is absurd and involves some dodgy private sector activity?

Wednesday night's edition featured two more politicians talking Scottish powers (a fairly famous Conservative ex-cabinet minister and a somewhat-less-famous-(to-put-it-mildly) Labour MSP). Evan was much more Katzian here, giving the Labour MSP a clear run and the Conservative peer a less-interruption-strewn interview. I think we, the viewers, learned more though. [I've not checked Twitter here but having two pro-union guests will doubtless have provoked a Twitterstorm among the cybernats.]

Now, to be fair to Newsnight, Wednesday's edition - and Evan's tweets - suggested great pride on the programme's part that (possibly) the Left's most revered intellectual, the 85-year-old Noam Chomsky, was being given the Evan Davis treatment.

That Newsnight would be as-pleased-as-punch to get an interview with the old man is unsurprising.

What was surprising was how short and tepid the interview was (they'd run out of time and Evan pulled every punch) and, more surprising still, the fact that the interview was preceded by a bunch of English vox pops who pretty much trashed every Chomsky quote they were given by Evan Davis - all of them regarding with pretty-much-unbridled contempt the professor's undeniable implication that they were mindless drones steered by a wicked elite into consumerism, individualism and scepticism about immigration..

...and, to be fair in turn to Noam Chomsky [perhaps the greatest example of a brilliant scientific brain being addled by silly politics], the cunning linguist turned the other cheek and carried on regardless (which is, perhaps, the privilege of being 85).

My stream-of-consciousness dries up at this point. So that's that.
Posted by Craig at 17:11