An election like this election is not an election for soundbites, really, but I feel the hand of the BBC on my shoulder 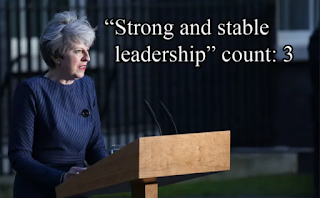 Politicians speaking in cliches, slogans and soundbites has become one of the most familiar features of modern politics over the last couple of decades or so.

Such phrases, endlessly repeated, get up the noses of many voters but they must also hit home with many other voters, which is why politicians doubtless persist with them so doggedly.

"Take back control!", "We stand for the many, not the few", "Education, education, education", "Drain the swamp!", "Yes We Can! "Tough on crime, tough on the causes of crime", "Fixing the roof while the sun is shining", etc, etc, etc.

The latest slogan - the Tories' "strong and stable leadership" - is, for some reason, proving to be particularly irritating to some people - the final straw, it seems. I'm hearing snide remarks about it across the BBC, including from BBC presenters.

Andrew Marr, as already noted, began his programme today by mocking its use, and his interview with Theresa May also began with him trying to get her not to use it ("Can we agree, to start with, that the one thing that voters deserve in what you yourself have said is going to be a very, very important election, is no sound bites?", "But no slogans, we can agree?", "Strong and stable leadership?"). He'd also mocked the phrase when trailing his programme on BBC Breakfast at 7.30 this morning.

Oddly, the immediate effect of this was that if prompted her to make use of her "strong and stable" cliche even earlier than she doubtless would have done! ("Well, there’s a reason for talking about strong and stable leadership and having a strong and stable government. It’s precisely because this is the most important election the country’s faced in my lifetime. It’s about the future of the country. It’s about the national interest" - which, if you think about it, is just one political cliche after another!).

And on this afternoon's The World This Weekend, Mark Mardell began his closing joint interview with Baroness Helena Kennedy and Kwasi Kwarteng MP by introducing them and then saying, "And both, I'm sure, are far too clever to say 'strong and stable' even once." (It didn't work. Mr Kwarteng used it twice).

[P.S. Paddy on Broadcasting House pursued it too].

They really seem to be trying to stamp it out. Why is it their business to do that though?
Posted by Craig at 14:45