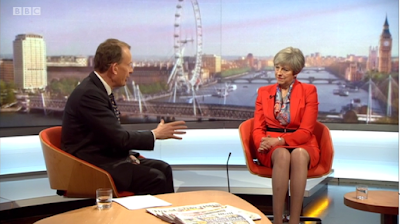 Last week we began an exciting new feature here at Is the BBC biased?:

Well, here (hot off the presses) are this morning's introductions, beginning at the beginning with Andrew Marr's main introduction:

Good morning. She's been Prime Minister since July, and there has been, in effect, one single message - I'm Theresa, trust me. But now it's different. She's gone to the country asking for her own mandate, and there is just such a lot we still don't know. This morning, in her first major television interview of the campaign, the Conservative leader Theresa May. The words 'strong and stable' won't I'm sure pass her lips once! And it's been a bruising first campaigning week for Tim Farron, leader of the Liberal Democrats. In theory, he should be able to scoop up many of the 48% who voted to remain. I said 'in theory', Tim! And paper reviewers crossing the spectrum - from Fraser Nelson, editor of The Spectator, to The Guardian's Owen Jones. And neatly sandwiched between, the Johnson who's jumped. Breaking her silence, Rachel Johnson on why she's joined the Lib Dems. Plus, Damian Lewis has been telling me how an ex-president gave him advice on playing a bad-boy billionaire. All of that coming up soon.

As for the introductions to each political interview, here's the one for Tim Farron:

Now, this election was supposed to be the Lib Dems' great opportunity to rise from the dead and speak for the millions who voted to remain inside the EU. Instead, and rather bizarrely, Tim Farron's opening days were side-tracked by a row over whether or not, as a committed Christian, he believed gay sex was a sin. So, can he recover? Well, Tim Farron joins me now.

and here's the one for Theresa May:

And now I'm joined live in the studio by the Prime Minister, Theresa May. Good morning.

Who came off best there? Who came off worst? How do they compare to last week's introductions? (I'm still keeping my powder dry on those till the election, and I'll let you keep on judging in the meantime).
Posted by Craig at 09:41