Going down well (so far)

I haven't seen much of the BBC's coverage of the Trump administration's military strike on a Syrian regime airbase but I'm getting a strong sense from the Twitter feeds of many familiar BBC reporter that the US military action is going down well with the (duly impartial) BBC.

...a point that Newsnight presenter James O'Brien has already taken on board:

Even Katty Kay is positive about the strikes:

And for the first time ever, I've actually seen BBC reporters re-tweeting criticism of Stop The War types opposed to US military action - including Hugh Sykes:

Others, like Kim Ghattas, are following their earlier tweets criticising the lack of action (by persons unspecified) over the last few years:

...with attacks on those critical of last night's strike: 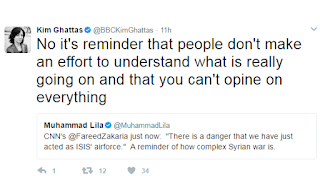 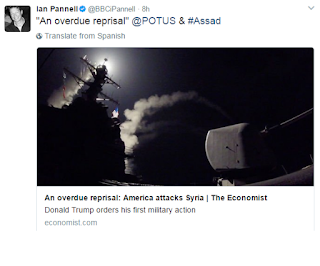 ...while others are placing a positive gloss on the politics of the military strike, such as Barbara Plett:

Others are even hoping that President Trump might go even further and do something even better, such as Laura Bicker:

The BBC's Middle East editor, Jeremy Bowen, has tweeted nothing about the strikes yet. Nor has the BBC's World Affairs editor John Simpson.

How much of any of this is feeding into the BBC's actual reporting I can't yet say (as I've not had time to check it out), but a definite BBC point of view is emerging on Twitter.

There are also, naturally, plenty of digs at Donald Trump for his past flat-out refusal to back military action in Syria, though even here - as with Quentin Somerville - there are surprising defences of Trump:

It's all gone topsy-turvy today.
Posted by Craig at 16:11