It is interesting how news stories that have dominated the BBC News website for a day or two suddenly drop down the news agenda.

The horrific killing of a young Kurdish-Iranian asylum seeker has been the lead story on the BBC News website for a couple of days and yet, this morning, has dropped to the 'small print' section of the BBC's home page main headlines as their 7th-placed story.

Sky News, in contrast, still has it as their second story and ITV has it among their 'large-print' headlines as their 5th-placed story.

Another difference between the three broadcasters is that both Sky and ITV have a major update on the story - the release of images of those the police want to question in connection with the attack: 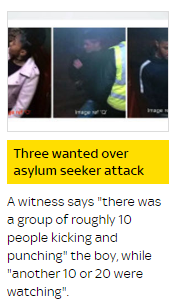 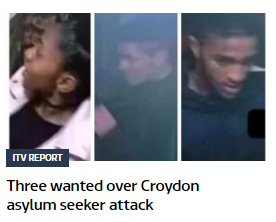 ...whereas the BBC's report includes no mention of the police's release of images, let alone the images themselves.

Presumably that's the BBC being 'cautious' again.
Posted by Craig at 07:53