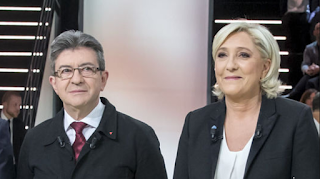 Tomorrow is the first round of the French presidential election - a tight four-horse race that could, if les dieux are in a particularly contraire mood, result in the National Front's Marine le Pen facing off against the Mao-admiring Jean-Luc Mélenchon in the second round - and the possibility of Frexit on two fronts.

The thought of that might make your jaw drop, but even more jaw-dropping was the contrast in tone between Evan Davis's paired interviews with a couple of French politicos on last night's Newsnight. It has to be seen to be believed.

Our Evan was positively unctuous towards the centrist M. Macron's spokesman, smiling and giggling, conspiratorially chuckling with him about how tough M. Macron would be with us Brexiting Brits if elected - and about the 'p' word ('populists').

And then came Evan's highly hostile interview with the Front National spokesman. What a monde of difference! Were I still doing 'interruption coefficients', this one would have been absolutely ciel-high. Evan barely let the FN chap get a word in edge-ways.

A couple of very representative screengrabs will capture the difference better, perhaps, than words. First, here's Evan with the French centrist: 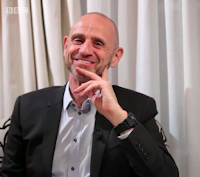 And now here's Evan with le homme from the Front National: 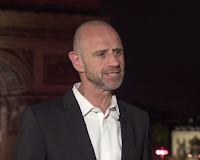